If you were injured because of a slip, trip, fall, or some other hazard on the premises you were on, you may be entitled to bring suit against the possessor of the property for your injuries. Slip and fall cases are based in tort. Because of this, you’ll be required to prove the general elements of a negligence claim. Proving liability or negligence can become complicated fairly quickly, so it’s important to consult with a slip and fall accident lawyer as soon after your accident as possible.

Elements for Establishing Negligence in a Premises Liability Claim

There are four basic elements that you must prove in establishing a premises liability claim:

Open and Obvious – Fifth Element in Slip and Fall Cases

The first step in a premises liability case is to establish that the Defendant owed you a legal duty, and the extent of the duty owed. Generally, a Defendant’s legal duty arises out of his or her possession and control over the property.

It is important to understand that this does not necessarily mean ownership of the property. In fact, the Michigan Supreme Court has found that, although the same individual or entity often holds ownership, possession, and control, they are distinctly different concepts. Take, for example, the owner of a shopping complex, in which the owner rents individual retail spaces to small businesses, but maintains the parking lot and sidewalk herself. In such a scenario, the business owner would likely be responsible for the injuries of a shopping center patron who fell in the parking lot, but would not be responsible if that same patron fell inside a store, because although the owner holds title to the store space, she is not in possession or control of that rented space at the time the injury occurs.

Determining the Extent of the Legal Duty Owed 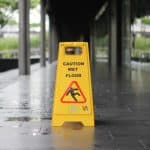 Once it can be established which individual or entity holds possession or control of the land on which the Plaintiff is injured, and thus identifies the proper Defendant in the suit, the second step is to identify what legal duty that Defendant owes to the injured Plaintiff.

In Michigan, the extent of the duty owed by the possessor of land is dependent upon the purpose for which the Plaintiff was on the land at the time he or she sustained the injury. Michigan law outlines three distinct levels of Plaintiffs in premises liability cases, and the Defendant owes different duties to each. Those duties are invitee, licensee, and trespasser, and the level of care owed by the Defendant will be dictated by the Plaintiff’s designation into one of these categories.

Invitees are those who are on the premises in order to confer some sort of commercial benefit upon the Defendant. Invitees are owed the highest duty of care under the law. In general, a premises possessor is required to (1) keep the premises in a reasonably safe condition for invitees; (2) warn of any dangers they know of, should know of, or created themselves, unless those dangers are open and obvious, and (3) inspect the premises to discover possibly dangerous conditions.

The second level of duty in Michigan is that which is owed to licensees. Licensees are those individuals who are on the land with the express or implied permission of the Defendant.  Typically this will include social guests at the home of the Defendant but may include other guests such as attendees of church services. With respect to licensees, a premises possessor may be held liable where the possessor knows or should know of a hazardous condition on the premises and fails to exercise reasonable care to make the condition safe or warn the licensee of the dangerous condition. Unlike with invitees, there is generally no duty placed on possessors to inspect their premises for dangers.

Sinas Dramis attorneys have helped residents of Michigan obtain compensation for their injuries arising from slips, trips, and falls due to negligence for over 60 years. Contact us today to discuss the specifics of your case at 855.758.0031.