We are dedicated to excellence and integrity and as a result, our work in the area of Michigan personal injury law has earned the respect of judges, the legal community, lawmakers, the public, and most importantly our clients. Because of this, our attorneys and staff are continually recognized as leaders in the law and within our communities, earning esteemed recognitions and awards along the way. Here is an overview of the achievements and honors that our firm and its attorneys have received over the years.

Brian McKenna Recognized as a “Top Lawyer” by Detroit Business Magazine – Earning this distinction is solely based on a peer-review survey sent out to certified lawyers in the Metro-Detroit area and demonstrates how Brian is highly regarded among his peers in the legal community.

Katie Tucker Receives the Women Association of Michigan’s (WLAM) 2021 Leadership Award – Katie is one of only six distinguished women attorneys in our State to receive the Regional Leadership Award. This award is presented in recognition and celebration of each attorney’s professionalism, excellence, and dedication to furthering the objectives of the Association.

Bryan Waldman Earns American Board of Trial Advocates Membership – Bryan was accepted into ABOTA – a prestigious, invitation-only group of attorneys committed to the preservation and promotion of the 7th Amendment that guarantees the right to civil jury trials. 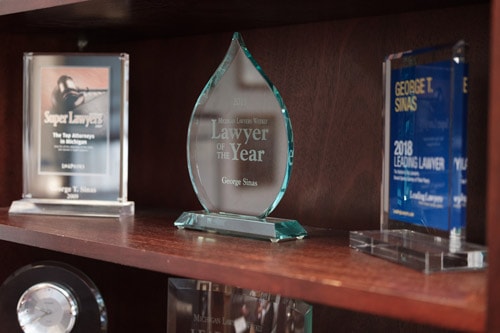 Tom Sinas Receives Top-Rated Grand Rapids Attorney Distinction – Every year, Grand Rapids Magazine and Grand Rapids Business Journal compile the results of a peer-review survey, honoring the recipients with the most votes with the “top-rate distinction.” Tom received this immense honor for the second year in a row in 2020.

Tom Sinas Recognized as a Michigan Top 10 Plaintiff’s Personal Injury Lawyer – Tom received this distinction from Leading Lawyers and is the only West Michigan attorney listed, as well as the youngest in Michigan.

Chair, State Bar of Michigan Negligence Law Section – The State Bar of Michigan offers its members various practice sections to which they can belong. The section dealing with personal injury law is known as the Negligence Law Section. Both plaintiffs and defense lawyers who practice personal injury are typically members of this section. Two Sinas Dramis partners have been elected to serve as chair of this section.

Most Respected Advocate Award, Michigan Defense Trial Counsel – The Michigan Defense Trial Counsel (MDTC) is an association of attorneys who focus their practice on defending personal injury lawsuits. Each year, the MDTC honors a plaintiffs’ attorney who encompasses the highest standard of competence, integrity and civility. Two Sinas Dramis partners have received this prestigious award.

Michigan Super Lawyers – A peer-review organization called “Super Lawyers” surveys attorneys across the United States to determine the top attorneys in each state in various practice areas. Over the years, several Sinas Dramis partners have been listed in “Super Lawyers” in the areas of plaintiffs’ personal injury law and family law. 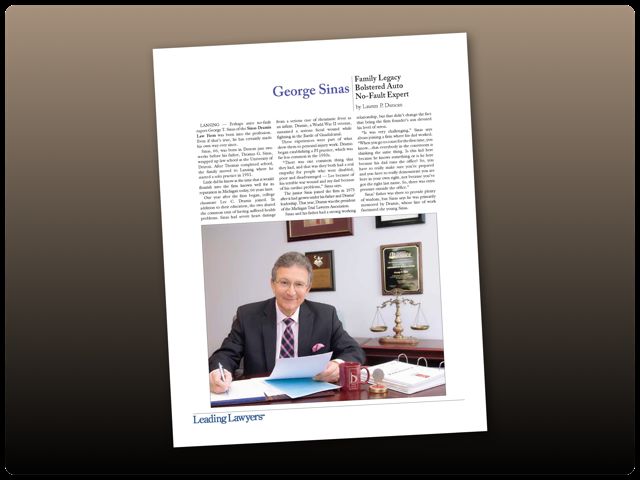 Top 5 Under 35, Ingham County Bar Association – Given by the Ingham County Bar Association, this award recognizes younger attorneys who have demonstrated character and integrity, as well as service to the legal community and general public, and who have a reputation for advancing the highest legal standards and professional ethics. Two Sinas Dramis attorneys have received this award.

Over the years, the firm itself has been recognized for its achievements and dedication to providing outstanding legal representation to plaintiffs and their families.

Tier 1 Ranking – Personal Injury and Family Law,  Best Law Firms – Based on client feedback and input from fellow attorneys and law firms, the Sinas Dramis Law Firm has been awarded a “Tier 1” ranking in the areas of personal injury and family law in the Lansing area. With the addition of our offices in Kalamazoo and metro-Detroit, Sinas Dramis also received additional rankings in these cities in 2020.

Pro Bono Circle of Excellence, State Bar of Michigan – Sinas Dramis is one of numerous Michigan law firms and corporations listed as part of the State Bar of Michigan’s “Circle of Excellence.” These entities have donated time and/or money to providing legal services to low-income individuals or families, or have provided legal assistance at no cost or for a reduced fee.