In late July 2018, rows of electric standup scooters suddenly appeared seemingly out of nowhere in Detroit. Bird, a scooter rental service, placed these scooters throughout midtown and downtown. People were immediately curious and hopped on. After all, they’re a fun alternative to travel by foot. Now, scooter rental stands are seen throughout many Michigan metropolitans, including East Lansing, Grand Rapids, and Ann Arbor, and are wildly popular on college campuses for reducing commute times. But as their popularity grows, one question remains: what do electric scooter laws in Michigan say about how and where one can ride?

A Brief History of Electric Scooter Laws in Michigan

A small store in Frankfort, Michigan sells and rents bikes, skateboards, surfboards, and standup paddleboards (SUPs). In 2014, before the wave of electric scooters hit the state, the shop began delivering its rental SUPs to customers by pulling them on a handheld trailer behind a motorized longboard. Genius, right? The system worked well and was an efficient way for employees to get SUPs to customers and back to the shop. However, the shop began experiencing resistance from local law enforcement.

In July 2016, while using a motorized longboard to transport SUPs, an employee attempted to pass a young girl and her mother, when the trailer made contact with the young girl. The girl was uninjured, according to police reports. However, the incident led to the arrest of the shop owners. As a result, their charges included “contributing to the delinquency of a minor,” a misdemeanor crime.

Charges were ultimately dropped, but the Frankfort Public Safety Committee instructed its City Attorney to draft an ordinance prohibiting electric skateboard use within Frankfort’s city limits. Local officials determined that the use of electric skateboards on public roads was a violation of state laws, claiming these boards met the definition of a motor vehicle without complying with laws that govern motor vehicles. Following years of dispute, the House of Representatives amended the Michigan Vehicle Code. It now includes provisions regarding the use of electric skateboards and went into effect in September 2018. 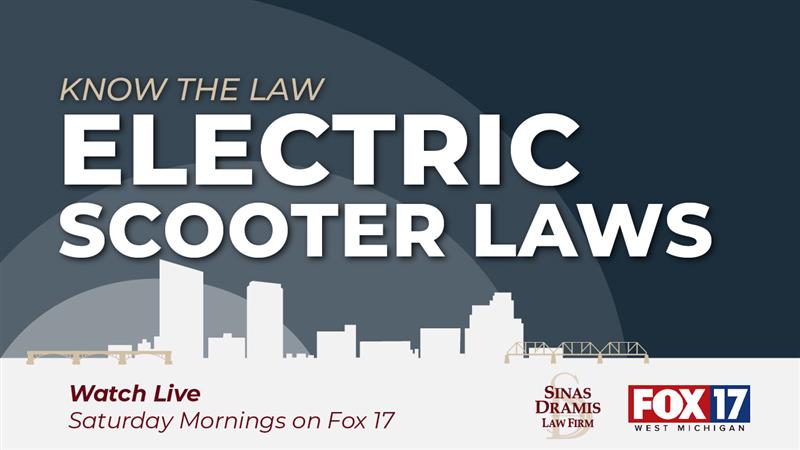 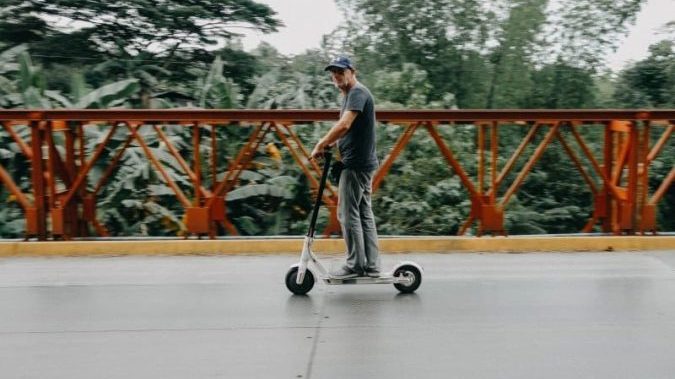 Electric scooters meet all the criteria necessary for an “electric skateboard” definition, under Michigan law. The scooters:

Can I Ride an Electric Scooter on Michigan Roads and Sidewalks?

So, if you’re hopping on an electric scooter anytime soon, make sure you’re following the rules that apply. They are as follows:

Using scooters on sidewalks is legal under electric scooter laws in Michigan. It is important to note here that the Michigan statute that governs electric scooters gives municipalities the final say in where e-scooters can ride. For instance, as mentioned in the above video by Tom Sinas, electronic scooters are not allowed on sidewalks in the downtown Grand Rapids improvement district.

While there are statewide statutes, a city, village, or township may additionally regulate the operation of electric scooters. However, these local governing bodies must post signs with restrictions or regulations in applicable areas. Local government can prohibit the use of electric scooters in or on:

Always know before you ride. Check with your local ordinances and pay special attention to any signage posted on your route.

What Happens if I Injure Someone on an E-Scooter?

Anyone operating an electric scooter has a duty to exercise reasonable care. If you’re operating one of these scooters and don’t exercise reasonable care and injure someone as a result, you can be liable. Which then raises the question of which financial resources are available if you were liable? The first place to look is to your homeowner’s insurance. Some policies include language that cover liability in these types of instances, whereas others don’t. Every policy is different. If you use an electric scooter regularly, it might be wise to make sure you have a homeowner’s or rental policy that covers you in the event you are found liable in an electric scooter accident. Additionally, if you are using an electric scooter rental from a company like Spin, Bird, or Lime, you may be required to follow additional terms and conditions using these devices.

E-scooters are all over our cities nowadays, and every time a user wants to rent one out, they’re faced with a lengthy and confusing document to sign, usually via the scooter company’s app, before using the equipment. However, do you know what you’re signing up for? Do you understand the importance of all the e-scooter terms and conditions? The article below explores these user agreements at length. Before renting out an electric scooter, it’s important to understand the terms and conditions that may limit your rights if you are involved in an electric scooter accident.