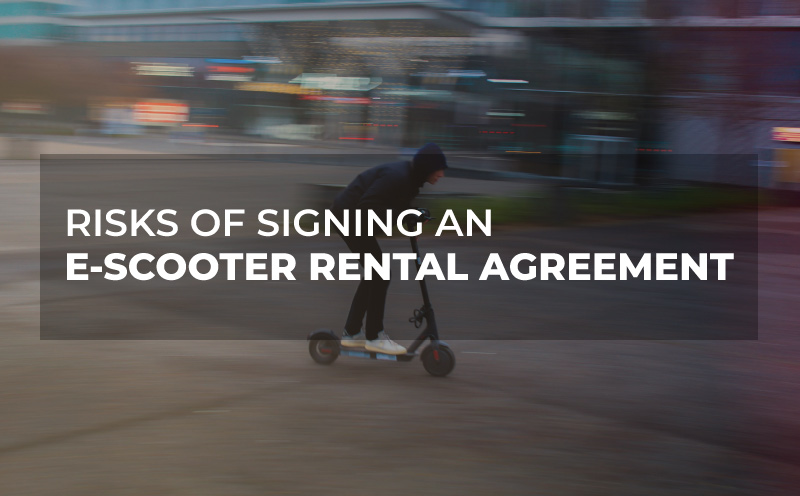 Over the past several years, electric scooter (or “e-scooter”) rentals have exploded in popularity as an affordable and convenient way for people to get around cities. Armed with a smartphone, prospective riders can download an app such as Bird, Lime, or Spin, and in minutes create a profile, link a card for payment, and begin cruising around town at speeds up to 20 mph. But there is one more important – and often overlooked – step between the prospective rider and the road: the e-scooter rental agreement and terms and conditions.

We’re all familiar with terms and conditions. They are those pesky blocks of text that stand between us and whatever new product or app we’re eager to use. Most of us blindly scroll through them before clicking ‘Accept’ so we can move on with our lives. But electric scooter riders should be aware that buried within these lengthy terms and conditions is important language that can significantly impact their rights in the event of an accident or injury while using the e-scooter.

Buried in most e-scooter rental agreements is a liability waiver, which, in most cases, waives a rider’s right to pursue a claim against the e-scooter company for injury or property damage.

Liability waivers are a common concept in our society and in many instances, they make perfect sense. The idea behind these waivers is simple: a company provides you with a good or service but does not want to be held responsible if you injure yourself or others while using their good or service. After all, just because a company provides an item does not mean they are willing to insure you in the event that you misuse that item.  In the context of e-scooters, this would logically mean that riders are assuming the risk of injury or property damage which may occur from the inherent risks associated with riding a scooter.

However, what many riders may not realize is that the language of these waivers is actually much broader.  In fact, not only do the terms and conditions waive the rider’s ability to sue the company in the event they are injured due to the risks associated with riding an electric scooter, but riders are also agreeing to waive their right to sue the company if they are injured as a result of the e-scooter company’s negligence.

Riders aren’t the only ones responsible for causing e-scooter crashes. In some instances, crashes and injuries occur as the result of the e-scooter rental company’s or manufacturer’s negligence. This negligence can include “vehicle or component malfunction” or the failure to maintain or repair equipment.  Given that numerous injuries have allegedly resulted from scooter malfunctions such as sudden acceleration or loss of brake function, riders need to be aware that they are assuming these risks and may not be able to seek compensation if they are seriously injured as a result of a malfunctioning or improperly maintained e-scooter.

If you’re considering signing an e-scooter rental agreement, here’s what you need to know:

You may also be releasing other parties from liability

Riders should be aware that these liability waivers also cover more parties than just the rider and the e-scooter company. Not only do these waivers apply to the e-scooter companies and their parent companies (such as Uber, Lyft, and Ford Motor Company), but they also extend to the manufacturers of the scooters and even the cities in which the e-scooter service operates. Bird, Lime, and Spin’s e-scooter rental agreements all contain language that defines the municipalities which authorize the companies to operate as “released parties.” Under this term and condition, riders injured as a result of a defect in a sidewalk or roadway the municipality is responsible for maintaining may have waived their ability to pursue a claim against the municipality for the sidewalk or roadway defect.

Assuming you can even still bring a claim against the company, certain language in e-scooter rental agreements includes time limitations for bringing a claim. While liability waivers are generally enforceable in most instances, they are not insurmountable and cannot absolve a company from liability for acts that amount to gross negligence or willful and wanton conduct. However, this creates a significantly higher burden for an injured person to meet. Injured riders seeking to bring claims against e-scooter companies often face an uphill battle, but some riders will still be entitled to bring certain claims against an e-scooter company. Those seeking to bring these claims should be aware that they may not have a lot of time to do so.

Given the prerequisites an injured person must achieve before even bringing a claim according to the terms and conditions, this one-year period can actually lapse very quickly. In our experience, one year is oftentimes not a sufficient enough amount of time to fully investigate a complicated claim such as this. While other companies such as Lime and Bird do not appear to have this same shortened statute of limitations period, these companies update their rental agreements often. Therefore, injured riders should act quickly if they are involved in a serious accident involving an electric scooter in order to protect their rights.

You may be agreeing to be subject to arbitration

Generally, when someone is injured as the result of another person or company’s negligence, the injured person has the right to bring a civil lawsuit in a court of law and pursue a trial by jury to recover compensation for their injuries. However, e-scooter riders need to be aware that, in exchange for the use of the e-scooter service, they are waiving their right to file a lawsuit and seek a jury trial if they have any claims against the company. Instead, riders agree that their claims will be subject to a private process called arbitration. Arbitration is a process where an appointed neutral party – or arbitrator – hears arguments from the parties to a case, reviews the evidence, and then renders a binding decision on the matter. Furthermore, the terms and conditions may also dictate where this arbitration must occur. While Spin and Lime allow arbitration to take place in the area where the rider resides, Bird requires arbitration to take place in Los Angeles, California, regardless of where the injury occurred.

Additionally, many of these e-scooter rental agreements contain specific procedures injured parties must satisfy before seeking relief through arbitration. For example, the terms and conditions for Spin require “Pre-Arbitration Dispute Resolution” for all potential claims against Spin. This process requires that individuals provide Spin with (1) their name, (2) address, (3) a written description of their claim, and (4) a written description of the relief they are seeking from Spin. This information must be submitted by U.S. mail to the Spin corporate offices in San Francisco. Upon submission of these items, Spin has 45 days to respond to and resolve the claim. If a resolution is not met within 45 days, only then can the injured rider seek arbitration to resolve their dispute with the company. Similarly, Bird requires that individuals address their claims through the Rider Support feature via the App. Riders must use their “best efforts” to resolve their disputes through this method as a pre-condition to demanding arbitration or filing a lawsuit. Only after the injured party exhausts these avenues can they seek arbitration to pursue their claims.

You may be able to opt-out of the arbitration requirement

Spin allows this notice to be given via email at support@spin.pm, while Bird riders must send written notice to Bird Rides, Inc., 406 Broadway, #369, Santa Monica, California 90401. Opting out of the arbitration portion of the agreement allows riders to bring claims against these companies in a court of law. However, riders must first overcome the waiver and release language described previously before they can recover anything for their claims. As previously discussed, getting around the waiver and release language can be an uphill battle before even getting to the arbitration clause.

Unfortunately, automobiles are one of the greatest risks to e-scooter riders. When a collision occurs between a car and an electric scooter, everything changes. For e-scooter riders with their own auto insurance policy or riders named on the policy of a family member with whom they live, they will turn to their own car insurance for no-fault PIP benefits, including medical coverage. However, many e-scooter riders use this form of transportation because they do not own an automobile or live with someone who does, and therefore do not have Michigan auto insurance coverage. In instances such as this, the injured e-scooter rider will have to submit their claims for no-fault benefits to the Michigan Assigned Claims Facility where it will be randomly assigned to one of the many auto insurance companies which are authorized to transact business in Michigan. While the Assigned Claims Plan will provide benefits to these injured persons, the 2019 revisions to the No-Fault Act limit coverage for medical expenses to just $250,000.

Additionally, if the injured e-scooter rider can demonstrate that the driver of the automobile was at fault for the accident, the injured rider may also be able to pursue a second and completely separate liability claim against the at-fault driver for any expenses incurred above the Assigned Claims Plan’s $250,000 cap, as well as compensation for their physical pain and suffering. Because of the complexity of how these types of claims interface with one another, injured electric scooter riders should consult with a skilled Michigan car accident lawyer versed in auto no-fault claims and car accident negligence claims any time a motor vehicle is involved.

If you are injured as the result of an e-scooter accident – either as the rider, pedestrian, or bystander – consulting with an experienced personal injury lawyer is often in your best interest. Look for a personal injury lawyer who has experience handling complex electric scooter injury claims. Clearly, e-scooter accidents present a complex situation. The specific terms and conditions applicable to each e-scooter rental agreement can vary between companies, and it is critical to investigate how those terms and conditions can apply to you personally. Given this reality, if you or someone you know is injured as the result of an e-scooter accident, it is best to consult with an experienced attorney who can help analyze any potential claims. Our firm proudly offers free personal injury consultations, including consultation for injured e-scooter riders. Request a consult here.