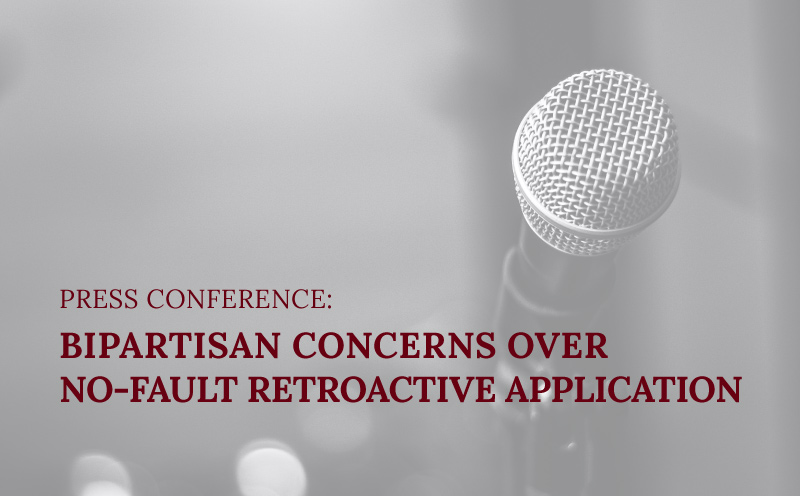 Upcoming changes to Michigan’s auto no-fault law will leave injured auto accident victims and their families without access to quality care for their recovery and rehabilitation. Sinas Dramis Law Firm has filed a lawsuit on behalf of several plaintiffs challenging two specific provisions of these reforms: (1) the 56-hour per week cap on in-home family-provided attendant care; and (2) the fee schedule that caps reimbursement for services that are not compensable by Medicare to 55% of what the provider was charging on January 1, 2019. The lawsuit, Andary et. al. v. USAA Casualty Insurance Company et. al, alleges that retroactive application of these reforms to survivors who were injured and whose contractual rights to no-fault benefits vested before these laws went into effect is unconstitutional and a violation of Michigan contract law. The lawsuit also challenges the future application of these provisions based on equal protection and due process grounds.

In March, the case was appealed to the Michigan Court of Appeals after Defendant’s Motion to Dismiss was granted by Judge Wanda Stokes of the Ingham County Circuit Court and Plaintiffs’ Motion for Reconsideration was denied in February of 2021. Plaintiffs filed their Brief on Appeal in May of 2021 and are currently waiting for Defendants’ to file their Brief on Appeal due in late July. Several amicus curiae groups in support of Plaintiffs have also filed amicus briefs, including the Coalition Protecting Auto No-Fault, Michigan Brain Injury Provider Council, and Brain Injury Association of Michigan. Additional amici groups are expected to file in support of Defendants after Defendants file their Brief on Appeal.

In addition to the amicus groups referenced above, the lawsuit has also garnered support from the legislature. On May 27, 2021, Representatives Julie Brixie (D-Meridian Township) and Andrea Schroeder (R-Clarkston) filed an amicus curiae brief stating that they never intended the attendant care limitations and 55% fee schedule to have a retroactive effect and that they do not support the retroactive application of these provisions. This amicus brief was accompanied by a memo of support signed by 73 current and former legislators.

On Wednesday, June 9, a group of legislators who signed the memo of support participated in a press conference along with several survivors and lead counsel for the lawsuit, George Sinas.

“Make no mistake,” said George, “before this law went into effect, everybody that purchased an auto no-fault insurance contract had the right to 24/7 compensable family-provided attendant care, and to treat with providers whose services were not slashed by 45%. Those were [legal] rights in these contracts.”

Make no mistake, before this law went into effect, everybody that purchased an auto no-fault insurance contract had the right to 24/7 compensable family-provided attendant care, and to treat with providers whose services were not slashed by 45%. Those were {legal} rights in these contracts.

It is encouraging to see this legislative support for Michigan’s auto accident survivors, and we are pleased to have this included for the consideration of the Court. As George stated during Wednesday’s press conference, “These legislators did a courageous act in making their feelings known about the horrible effect of retroactive application, and I salute them for their service.” However, while it is significant to have support from so many legislators, this does not change the course of the lawsuit and it will continue to proceed in a normal and ordinary manner. We will continue fighting for the rights of auto accident survivors and their medical providers that will be subject to the unfair consequences of the 2019 Michigan no-fault reform.

It is expected that we will not have a decision from the Court of Appeals regarding the allegations in this lawsuit until the end of this year, if not later. Once the Defendants and amici groups have filed their briefs, the Court of Appeals will then schedule an oral argument on the case. Only after the oral argument will the Court of Appeals issue a decision, and once that decision has been made, the parties will have the opportunity to try and appeal to the Michigan Supreme Court. Each process often takes months, and although we are doing all we can to move this case forward, auto accident survivors and their families and caregivers need to prepare themselves for the changes coming on July 2, 2021.

These legislators did a courageous act in making their feelings known about the horrible effect of retroactive application, and I salute them for their service.

Additional Legal Action Regarding the Concerns Over No-Fault Retroactive Application

The upcoming changes to our no-fault system are being challenged in the Michigan legislature in addition to our no-fault lawsuit. House Bill 4486 and Senate Bill 314 seek to address the 55% fee schedule that will apply to medical providers but must be passed very soon for changes to go into effect before July 2nd. If passed, these bills would eliminate the concerns regarding the 55% non-Medicare fee schedule, allow medical providers to be able to sustain their businesses, and allow all auto accident survivors, current and future, to access quality medical care. These bills do not, however, address the 56-hour cap on family-provided attendant care.

Survivors, their families, and their medical providers cannot wait until after July 2nd for a decision to be made without facing a devastating reality. Now is the time to contact your representatives about passing House Bill 4486 and Senate Bill 314!