Joel Finnell joined Sinas Dramis Law Firm in 2011 and quickly excelled at appellate law, earning a favorable published appellate decision in the first appeal he handled out of law school. He now primarily focuses his practice on representing clients in the Michigan Court of Appeals and Michigan Supreme Court.

As the firm’s appellate attorney, he works very closely with our senior-most attorneys to develop successful legal strategies 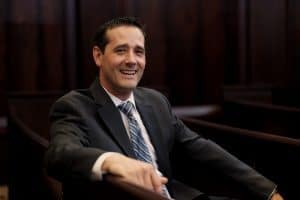 that will withstand an appeal all the way up to the state’s highest Court. Other attorneys at the firm also call upon Joel to provide additional tactical legal support in heavily defended and more-complex cases. Joel’s role at the law firm is very unique and is one that often sets Sinas Dramis Law Firm apart from other firms. Many firms do not have an in-house appellate specialist like Joel who possesses the knowledge and expertise that is required to provide top-tier representation in the Michigan appellate courts.

Joel’s dedication and success in this role makes him a vital member of the firm, and his practice helps our attorneys stay ahead of the many complex legal issues that arise in auto no-fault, semi-truck, catastrophic injury, and wrongful death cases.

In Joel’s words, what he enjoys the most about his practice is:

“Having the opportunity to do very meaningful work to help others while working with some of the most talented lawyers in the state.”

Of Joel’s many successful appeals, he has most notably handled or been involved in: 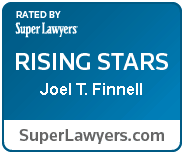 In 2019, Western Michigan University Thomas M. Cooley Law Review selected Joel’s brief, co-authored with Sinas Dramis partner, Stephen Sinas, as the recipient of its prestigious annual Distinguished Brief Award. Michigan Super Lawyers recognized Joel as a “Rising Star“ from 2015-2020, a designation given to only 2.5% of all eligible Michigan attorneys. In 2017 and 2018, The National Trial Lawyers also recognized Joel as being a “Top 40 Under 40” trial lawyer in Michigan. Furthermore, Joel is also named a “Top 100” by The National Trial Lawyers in 2019.

In addition to his appellate practice, Joel co-authors several publications dealing with the auto no-fault law that are relied by practitioners throughout the State, including Sinas & Finnell, Tort Threshold Update (Lansing: ICLE, 2014-2018); and Sinas & Finnell, The No-Fault Tort Threshold: An Annual Survey of the Law (Lansing: Michigan Association for Justice, 2014-2017). He is also a regular contributing author to the No-Fault Red Book Online.