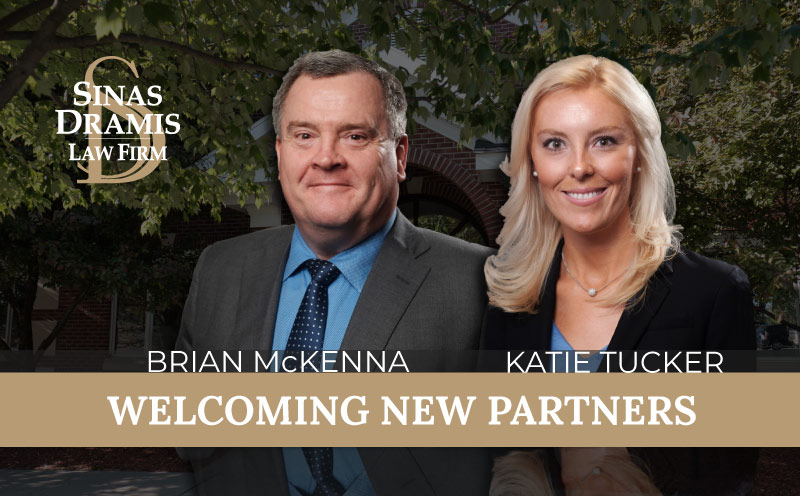 We are pleased to announce the welcome addition of two new partners at Sinas Dramis Law Firm – Brian A. McKenna and Catherine E. Tucker. McKenna and Tucker join George T. Sinas, Michael E. Larkin, James F. Graves, Bryan J. Waldman, Stephen H. Sinas, and Thomas G. Sinas, making up the firm’s distinguished group of shareholders. Both attorneys focus their work on plaintiff’s personal injury cases across the state of Michigan, handling a variety of case types from wrongful death claims to claims against negligent drivers on behalf of injured victims in Michigan. The addition of these prestigious, well-regarded attorneys further expands the reputation of excellence and integrity in legal representation in Michigan the firm was founded upon 70 years ago.

Brian McKenna joined Sinas Dramis in 2018 after a seasoned and successful career as a plaintiff’s personal injury lawyer. An integral member of the Southeast Michigan legal community, Brian was vital in opening the firm’s fifth office, located in Saint Clair Shores. Prior to joining Sinas Dramis, Brian was a shareholder and served on the Board of Directors at Sachs Waldman – one of the most esteemed personal injury firms in Michigan. Brian attended Ferris State University, obtaining an undergraduate degree with high honors before graduating from Wayne State University Law School in 1993. Brian has been included on the Best Lawyers in America list every year since 2013 and the Michigan Super Lawyers list since 2008.

Catherine (Katie) Tucker focuses her practice on representing the rights of individuals injured in collisions involving automobiles, motorcycles, and semi-trucks in the state of Michigan, as well as representing the various medical providers that render care and treatment to these individuals. In that capacity, Katie handles the majority of the firm’s medical provider claims, working with medical professionals and treatment centers throughout Michigan. Born and raised in East Lansing, Katie earned her undergraduate degree, with high honors, in Economics from Michigan State University and her law degree, magna cum laude, from Michigan State University College of Law. She was admitted to practice law in 2012 and was sworn in before the bar of the Supreme Court of the United States in 2019. Tucker is a Board Member and President of the Women Lawyers Association of Michigan, Mid-Michigan Chapter (WLAM) and a Past President of the Ingham County Bar Association, Young Lawyers Section. In 2019, Michigan Lawyers Weekly named her an “Up and Coming” lawyer and was named a “Top 40 Under 40” by the National Trial Lawyers.

Excellence, Integrity, and Results for Michigan

The Sinas Dramis mission is to provide anyone in the state of Michigan with exceptional legal representation. What once began as a Lansing-based firm when Thomas G. Sinas and Lee C. Dramis opened office seventy years ago, Sinas Dramis has now flourished into a true statewide legal presence throughout Michigan. With this addition of McKenna and Tucker to the partnership team, and with their exceptional leadership, knowledge, and advocacy expertise, the firm will continue on in this tradition of excellence for many years to come.

On behalf of the Sinas Dramis team – please join us in congratulating Brian and Katie on this monumental development!