Click it or Ticket – What is the Seat Belt Law in Michigan? 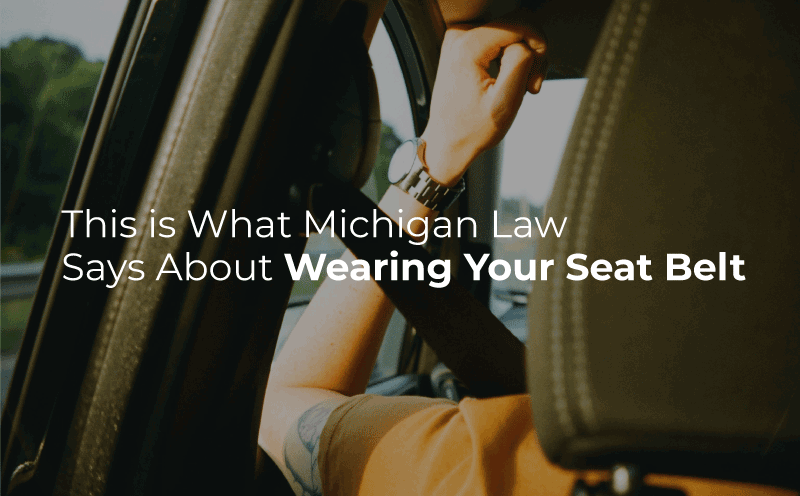 It should come as no surprise to learn that study upon study show that seat belts save lives. In fact, 39% of victims killed in motor vehicle collisions last year were not wearing their seat belt, and car crashes are sadly the leading cause of death in children ages 1-13. The Michigan State Police have found that wearing a seat belt reduces the risk of fatal injury to front-row occupants of a vehicle by 45% and keeps passengers secure within the vehicle during a collision. In efforts to improve safety, the MSP run an annual seat belt enforcement period, commonly known as “Click it or Ticket” and Lansing car crash lawyer, Bryan Waldman, discussed the “Click it or Ticket” campaign on a recent WLNS 6 “Legal Edge” segment. Grand Rapids auto accident attorney, Tom Sinas, also recently touched on seat belt laws on his weekly Fox 17 “Know the Law” segment. He expanded further on the topic to discuss how failing to wear a seat belt not only jeopardizes your safety but also threatens any auto liability claim you could pursue against a driver who caused your accident.

What is Michigan’s Law on Seat Belt Use?

Michigan’s seat belt law is a primary law. This means a police officer can legally pull you over and ticket you solely because you are not wearing a seat belt while driving a vehicle. A police officer does not have to have any other reason to pull you over. Seat belt use in the front seat is mandatory in Michigan for everyone. In addition, as the driver, you are responsible for securing minors within your vehicle according to the law. This includes children who need to be restrained in an infant car seat, convertible car seat, or booster seat, as well as children who meet the age and height restrictions to be restrained solely in a seat belt.

Bryan Waldman goes on to cover the different seat belt and car seat requirements based on age groups and height restrictions of children. For a full write-up on Michigan’s car seat laws, head here.

Consequences of Not Wearing Your Seatbelt in Michigan

Obviously, paying the traffic ticket fine is one of the most immediate impacts of not following Michigan’s laws. However, a traffic violation that results in points on your driver’s license, therefore oftentimes increasing your auto insurance premium, becomes the real issue for most drivers. That said, you may be surprised to learn that you will not receive any points on your driver’s license for breaking the seat belt law in Michigan, or failing to secure children within the vehicle according to Michigan’s car seat laws. The same is true of texting-and-driving violations. This reveals quite a legislative gap in priorities and is something that should be looked into further in the future to help make Michigan roads safer.

In Michigan, auto accident victims are often entitled to pursue two different types of auto accident claims – one claim for no-fault benefits provided through their own auto insurance policy, and a second claim against the other driver if they were responsible for the collision and resulting injuries. However, if you were not wearing your seat belt in the way that the Michigan seat belt law requires, your claim can be reduced. Michigan law defines this concept as comparative negligence or comparative fault. Further, Michigan law states that claims brought by drivers or passengers not wearing their seat belt can be reduced by up to 5% of their total potential recovery. Comparative negligence does not apply to no-fault benefits. If you’re injured in a crash and entitled to no-fault benefits, you will be able to pursue those benefits regardless if you were belted or not at the time of your collision without any reduction.

Buckle Up Every Time You Get in a Car

As a law firm that handles car accident cases in Michigan on a daily basis, we have unfortunately encountered the tragic result of failing to use seat belts. No matter if you’re in the front or back seat, we always advise everyone in the vehicle to buckle up before putting the car in drive. It’s a simple action that can significantly increase the outcomes of a serious car accident. As part of this year’s “Click it or Ticket” campaign, make a pledge within your home to buckle up every single time you get into a vehicle. And, it’s a great example to set for your kids!