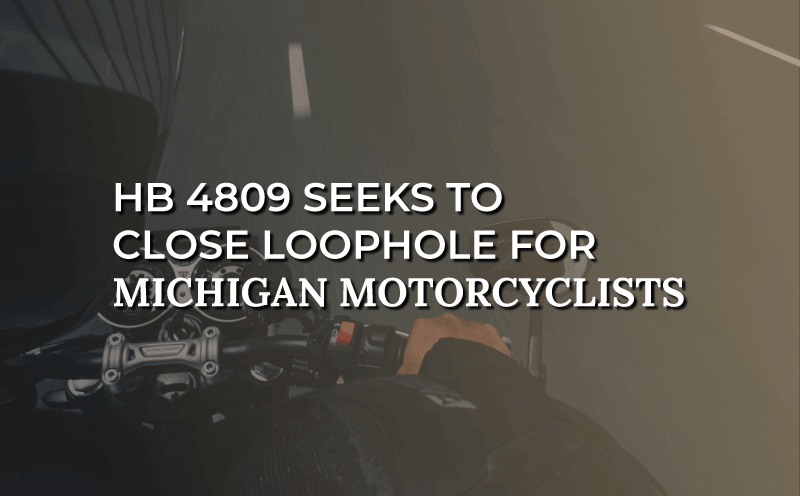 The 2019 auto no-fault overhaul left a lot of Michigan motorcyclists with limited access to no-fault PIP benefits, but recently introduced House Bill 4809 seeks to fix some of these issues. Grand Rapids personal injury lawyer, Tom Sinas, has handled many motorcycle injury claims throughout the state of Michigan. He recently appeared on Fox 17 “Know the Law” to break down HB 4809 and what it could mean for Michigan motorcyclists if passed by Legislators.

In order to understand the issues HB 4809 seeks to correct, we must first remember how the no-fault system worked for motorcyclists prior to the 2019 no-fault reform. Before the reform, motorcyclists injured in collisions with motor vehicles most commonly obtained their no-fault PIP benefits through the insurer of owner, registrant, or driver of the motor vehicle involved in the crash.

As Tom has discussed at length in several installments of “Know the Law,” for the first time in the history of Michigan’s auto no-fault law, consumers can now purchase no-fault coverage at levels less than lifetime unlimited following the 2019 no-fault reform. Despite this significant and sweeping change to our auto insurance system, motorcyclists must still look first for their no-fault benefits from the insurer of the owner, registrant, or driver of the motor vehicle involved in the collision, even under the new law. Therefore, if that person chose less than unlimited lifetime no-fault policy, the motorcyclist is stuck with that person’s choice. This scenario is true even if the motorcyclist opted to purchase unlimited no-fault coverage on their own auto insurance policy.

HB 4809 proposes to do away with the old priority rules in which an injured motorcyclist obtains their no-fault benefits through the insurer of the owner, registrant, or driver of the motor vehicle involved in the collision but instead receive PIP benefits through the motorcyclist’s own auto insurance policy. Motorcyclists insuring other automobiles in addition to their motorcycle would then turn to their own auto policy if they’re injured in a motorcycle crash. HB 4809 creates a pathway for injured motorcyclists to access their own insurance policy, which they currently have little ability to do so.

Under HB 4809, motorcyclists who do not have an auto insurance policy would then go to the Michigan Assigned Claims Plan (ACP) for payment of no-fault PIP benefits. Under Michigan’s new auto law, those seeking benefits through the Assigned Claims Plan are limited to $250,000 maximum in medical expense coverage.

HB 4809 is pending before the Michigan Legislator and only time will tell if it passes and becomes law. Motorcyclists in favor of HB 4809 who wish to close the loophole they now find themselves in are should contact their State Representative in support of the Bill.

Grand Rapids motorcycle accident lawyer Tom Sinas explains this in the video above on Fox 17 “Know the Law.”