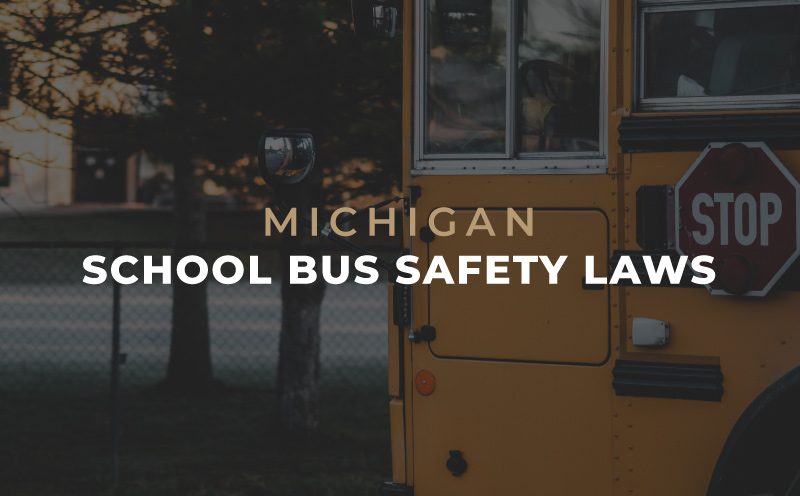 School is back in session, which means that drivers will once again be seeing school buses on the road. The laws that govern how drivers must act around school buses are some of the most important, but also some of the most misunderstood, laws contained in Michigan’s Vehicle Code. Lansing personal injury attorney, Bryan Waldman, recently appeared on WLNS 6 “Legal Edge” and Grand Rapids personal injury attorney, Tom Sinas, recently appeared on Fox 17 “Know the Law” to share important reminders about Michigan school bus laws and discuss a few changes to these laws that will go into effect on October 11, 2021.

A violation of the law requiring drivers to stop for school buses is a civil infraction, which results in a fine and three points being added to the driver’s record with the Michigan Secretary of State. Additionally, the judge or magistrate assigned to the case has the discretion to add community service to the punishment. However, this community service must take place at a school and can be for no more than 100 hours.

Although following Michigan school bus laws are simple, many are surprised to learn that most Michigan bus drivers claim that at least once a week, cars fly by their vehicle while stopped with their red lights on, regardless of if the bus is also equipped with and using a swinging stop sign out the driver’s side window. When in doubt, think of a school bus as a moving traffic signal and treat it accordingly.

There are additional safety considerations for kids getting to and from school during the school year. Driving near crosswalks, sidewalks, or school zones require drivers to follow important safety rules as explained below.

How to Handle School Crosswalks

Crossing guards also play a pivotal role in keeping kids safe when going back to school. As soon as the guard steps into an intersection with their stop sign, oncoming drivers must stop. Drivers must remain stopped until all the children cross the street, and the crossing guard clears the intersection.

Blocking Sidewalks with Your Vehicle

Blocking the sidewalk with your vehicle is against the law any time, but is a particular problem during the school year. When your vehicle is blocking a sidewalk, it forces kids getting on or disembarking from school buses to walk around the vehicle into the roadway. This obviously puts school kids at a greater risk

During the school year, schools have the right to restrict driving speeds up to a thousand feet away from their building from a half-hour before the day’s first class and a half-hour after the final class of the day ends. It can be easy to forget these reduced speeds during the summer, so motorists must take it upon themselves to pay attention, look at street signage, and obey posted restricted speeds.

Effective October 11, 2021, a few changes will be made to Michigan’s school bus laws. The first change will allow for enforcement of violations by the use of a “stop-arm camera system.” This is essentially a device with two or more cameras on a school bus that is able to photograph a car and its license plate while documenting the date, time, and location that the photograph was taken. Under the law, there is a rebuttable presumption that the owner of a motor vehicle that fails to stop for a school bus is the driver of that motor vehicle. This means that it becomes the burden of the owner to show they were not driving the car at the time the violation occurred. For this reason, the use of stop-arm camera systems should make enforcement of the law much easier for law enforcement.

The second change in the law eliminates the ability of the judge or magistrate to add community service to the punishment for a violation of the law.

We hope to see these changes lower the instances of cars passing school buses when stopped, and in turn, create a safer ride for kids getting to and from school.