On Saturday February 23, 2013, two mid-Michigan residents were among those injured in a tremendous Daytona crash on the final lap of the Nationwide race at Daytona International Speedway. The incident occurred when driver Kyle Larson was involved in a multi-car incident, wherein his car was struck from behind, spun sideways, and went airborne, slamming into the catch fencing that circles the track to protect spectators from debris during such an incident. Larson’s car tore a massive hole into the fence, allowing pieces of the car, including a tire, to scatter into the stands and strike race fans. Debris may also have been propelled over the fence. In all, twenty-eight spectators were injured in the event, with fourteen, including the two mid-Michigan residents, requiring hospitalization.

Race tracks and racing promoters have long been aware of the dangers the sport poses to spectators. The early days of racing saw several tragic events, including one at the 1955 24 Hours of Le Mans, where a car driven by Pierre Levegh left the racing surface and violently slammed into an onlooking crowd, killing eighty-one people, including Levegh. Shortly thereafter, many tracks began implementing safety equipment, including catch-fencing, to protect on-looking crowds. 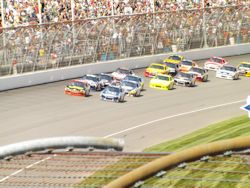 Despite the implementation of fencing and other safety devices, the sport has remained unreasonably dangerous to its fans. Although catch-fencing is now standard equipment at race tracks, the cars at the top levels of the sport move at such extreme speeds that when they crash, parts from the car are often flung with such force that they fly over the fence and into the stands. For example, a horrific 1998 crash at the Michigan International Speedway in Brooklyn, Michigan killed three people, and seriously injured several more, when an open-wheel Indy racecar driven by Adrian Fernandez hit the wall, causing the tire assembly to fly over the fence and into the crowd, where it struck on-lookers.

Attorney Jim Graves, of the Sinas Dramis Law Firm in Lansing, Michigan, represented in court the family of one of those killed in the MIS incident, and is well aware of the dangers to fans at major racing events. “Race fans and their families should be able to safely enjoy the sport without fear of injury or even death. Track owners have an obligation to protect their fans from the danger of flying debris. The tragedies of the past like the carnage at MIS in 1998, should not be repeated. The recent events at Daytona are grim reminders that track owners must do more to protect spectators,” stated Attorney Graves.

Although catch fences and safety walls take much of the blame for these dangerous incidents, other factors may be involved as well. Two NASCAR tracks, including the Daytona International Speedway, where Larson’s crash occurred this past Saturday, utilize “restrictor plate” racing, wherein a plate is placed between the carburetor and intake manifold of the engine, “restricting” the airflow into the engine, and thus choking back horsepower, and in turn, car speed. Although the aim is to slow down the cars and make the sport safer for drivers, the plates also cause the cars to have roughly the same horsepower, and in turn, to run at the same speeds. This makes the cars bunch together on the track, often racing in large packs. When a car loses control while racing in these packs, the other cars surrounding it are much more likely to make contact, causing a massive crash. In fact, it was exactly this scenario that played out in the Kyle Larson incident on Saturday at Daytona. In fact, many NASCAR drivers have publicly complained that, despite the slower speeds, the tight-quarters racing actually makes for more dangerous conditions for both spectators and participants alike.

These restrictor plates may have played a role in the Larson crash on Saturday. Larson was not involved in the initial event. Rather, the crash began when driver Regan Smith, who was leading the race, made contact with another driver, causing both cars to spin. The tightly packed field behind him had nowhere to go, and they slammed into Smith’s car. In the process, Larson’s car spun, went airborne, and slammed into the fence.

Despite improvements to racing surfaces, catch fencing, and retainer walls, the sport of auto racing continues to be dangerous. The list below provides a brief view of some examples of spectator-involved tragedy at racetracks.

1909 – Two spectators were killed at the Indianapolis Motor Speedway when a race car crashed over and through the safety fence.

1955 – Eighty-eight spectators were killed when a race car crashed and cleared a retaining wall during the 24 hours of HLM.

1966 – During a crash at the Indianapolis 500 seventeen fans were injured when flying sheet metal was propelled into the stands.

1973 – At the Indy 500 several fans were struck by flying metal propelled over the retaining fence.

1987 – A spectator was killed during the Indy 500 when a wheel and tire assembly traveled into the stands over the retaining fence.

1994 – During a race at the Phoenix International Raceway four spectators were injured when a wheel and tire assembly was propelled into the spectator area over a concrete wall and retaining fence.

1997 – Several spectators were killed during the Daytona 500 when the hood of a race car entered the spectator section over the barrier wall and retaining fence.

1998 – Spectators were injured during the Grand National Nascar Race in Talladega where debris flew into the spectator section. A wheel and tire was propelled over the concrete wall barrier and retaining fence into the grand stands at the Atlanta Motor Speedway.

1999 – Three spectators were killed when struck by a wheel and tire assembly which made it over a concrete wall barrier and retaining fence at Lowe’s Motor Speedway.

2013 – Twenty-eight spectators were injured in a massive crash during the Nationwide Series race at Daytona International Speedway.