In 2018, the country stopped what they were doing to listen to the victim impact statements from Sister Survivors and their unified call to hold educational institutions accountable for sexual misconduct and abuse. We watched in amazement as that disgraced former doctor received a sentence of 40-175 years in prison.

We discovered in 2018 that MSU had issued two different versions of a Title IX report concerning a 2014 Title XI complaint. While our client, represented by Michigan sexual assault attorney, Jim Graves, was given one version finding there was no sexual assault by Nassar, another version damaging to MSU was kept secret. You can read more about the Title IX controversy in Abigail Pesta‘s book, “The Girls,” which includes multiple interviews with Jim Graves.

2019 brought the conviction and sentencing of Nassar’s supervising Dean for neglect of duty and misconduct in office.

A few months later, the former MSU president was charged with two felony and two misdemeanor counts of lying to police in relation to her handling of the Nassar scandal.

In February 2020, came the first public reports of abuse by the late Dr. Robert E. Anderson, who served as a former director of the University Health Service and team physician for the UM Athletic Department. He was employed by the University of Michigan from 1968 to 2003.

What does this all mean? Regrettably, it means campus sexual assault remains a tragic societal problem for which educational institutions must be held accountable. What can we do right now? We must listen to survivors, learn from past mishandling of sexual assault and abuse complaints, and support the work to hold responsible educational institutions accountable moving forward. Most importantly, we should educate ourselves about the overwhelming problem of campus sexual assault across the country and in our very own backyards.

Campus Sexual Assault by the Numbers 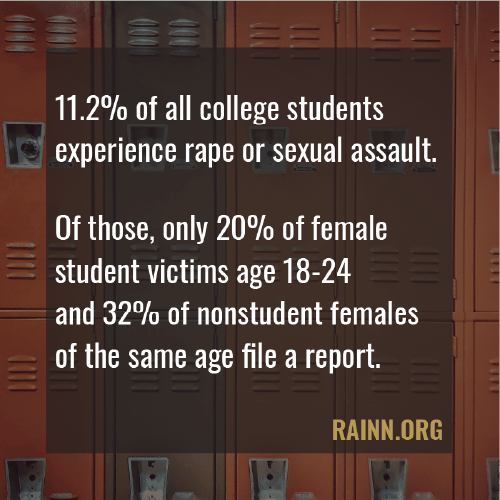 According to RAINN, 11.2% of all college students experience rape or sexual assault. While the prevalence of sexual misconduct is much, much higher among undergraduate students, graduate students, and professionals on college campuses experience sexual abuse as well. Sadly, only  20% of female student victims age 18-24 and 32% of nonstudent females of the same age file a report.

What is Title IX?

When you hear about sexual assault at colleges and schools, you inevitably hear talk about Title IX. But many people may not know what that term means. Understanding Title IX and the protection it is required to provide at universities and all publicly-funded schools is important. Passed in 1972 as part of the Education Amendments of 1972, Title IX protects people from gender-based discrimination in educational programs.

According to the University of Michigan website: “We are committed to preventing sexual misconduct and offering support to those who have been harmed. Sexual assault, harassment, discrimination and all forms of sexual misconduct have no place at the University of Michigan. It’s up to each of us to create a healthy and safe campus, to support those who come forward; and to participate in prevention programs.”

Title IX doesn’t just protect college students, employees, and visitors and protects those at high schools, middle schools, and elementary schools. Under Title IX, each school district is required to have at least one person designated as the Title IX Coordinator.

How Colleges and Schools Can Stop the Cycle of Sexual Misconduct

At Sinas Dramis, we are committed to listening to Survivors. We believe the best lessons for moving forward come from them. An article reporting the alleged abuse of Dr. Robert Anderson at U of M in the Lansing State Journal offered the following recommendations by Sister Survivors to educational institutions:

If you’ve experienced campus sexual assault or abuse, know that we are listening. Please do not suffer in silence; you’re not alone. When you’re ready to seek possible legal representation, you can submit a confidential contact form and one of our experienced Michigan sexual assault attorneys, who also helped Nassar Sister Survivors, will call you.