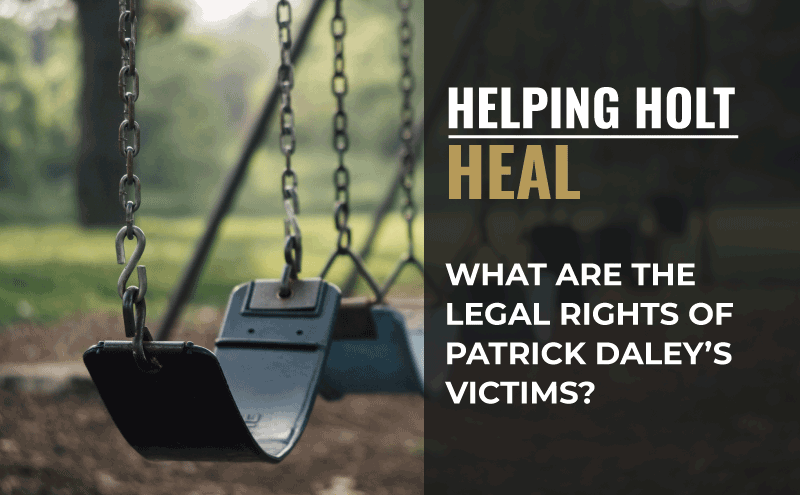 How Do Their Legal Rights Compare To The Victims of MSU’s Larry Nassar?

As the Greater Lansing community was attempting to overcome the shock and grief caused by the decades of sexual abuse perpetrated by MSU doctor, Larry Nassar, we learned that there was another sexual abuse crisis at another school in our community. A former fifth-grade teacher at Holt Washington Woods Middle School, Patrick Daley, was charged in 2018 with 24 counts of 2nd-degree criminal sexual misconduct for sexual abuse he perpetrated on his students in his class. In October 2019, Mr. Daley was ultimately convicted of 18 counts of those charges and is currently serving a 15-year prison sentence. While the criminal prosecution of Mr. Daley is now over, victims of his abuse may be wondering about what legal rights they may have to pursue civil claims in relation to their abuse.

Victims of sexual abuse can pursue civil claims against their abuser to recover compensation for the harms caused by their abuse. In most situations, however, the abuser does not have insurance coverage or assets from which any financial recovery could be made for the victims. In order to recover any compensation for their damages, these victims will need to show that another person in authority or entity was also responsible for the abuse. This can be done by showing that another person in authority or entity knew, or had reason to know, that the abuse was occurring and either allowed it to happen including by failing to report it or failed to take action to prevent it from happening. The success of these claims depends upon the specific facts and circumstances of the situation. Furthermore, there are many complexities and nuances within the law that apply to these types of claims.

For MSU to have been held civilly liable for Larry Nassar’s abuse, it was necessary to show that MSU had knowledge of Larry Nassar’s abuse and failed to take adequate measures to prevent it from happening again. As our community learned, there were multiple instances where knowledge and information about Larry Nassar’s abuse was shared with various representatives and officials of MSU. The details of these issues had an enormous impact on the rights of victims to recover compensation from Michigan State University.

In addition to the issues with showing that Michigan State University had knowledge and information about Dr. Nassar’s abuse, the case also had the added complexity of involving litigation against an institution controlled by the State of Michigan. Claims brought against a state-controlled institution, such as Michigan State University, are subject to the Court of Claims Act. The Court of Claims Act sets forth unique procedures and restrictive rules that limit the rights of victims to pursue civil liability against the state of Michigan and its agencies and organizations. Accordingly, in the Larry Nasser litigation, there were ambiguities and arguments about to what extent the victims were subject to the strict notice and procedural requirements in the Court of Claims Act.

There were also numerous issues in the Larry Nassar case regarding the statute of limitations. A statute of limitations is a period of time within a victim must bring a claim against the wrongdoer, or the victim will be forever barred from doing so. Many of Dr. Nassar’s victims were adults at the time they came forward about their abuse and faced arguments that the statute of limitations for their claims against Michigan State University had expired. These issues factored into how the case was litigated and ultimately resolved.

Ultimately, the Larry Nassar case is an example of how the particular facts of sexual abuse can lead to unique complexities and nuances within the law that affect the rights of victims in civil claims regarding sexual assault.

At this point, facts exist to base various civil claims against Holt Public Schools for the sexual abuse perpetrated by Mr. Daley. As stated above, the specific facts of the situation and applicable legal theories will determine whether these claims will be successful. However, there are some important ways that claims against Holt Public Schools would be different than the claims brought against Michigan State University for Larry Nassar’s abuse.

Regarding the issue of where Holt Public Schools could be sued, because the school system is not a State organization, it does not need to be sued in the Michigan Court of Claims. Rather, it would be subject to litigation in the Ingham County Circuit Court or the United States District Court for the Western District of Michigan.

Moreover, as indicated above, any sexual assault claim in which the victim is attempting to hold another person in authority or entity responsible, it is required that the person or entity knew or should have known of the abuse and failed to take appropriate measures to prevent it from happening. In the Larry Nassar case, the civil litigation brought out many of the details regarding MSU’s knowledge and information about Dr. Nassar’s sexual abuse, which further strengthened the criminal case against him and other University officials who were criminally prosecuted for their actions in relation to the abuse. In the case against Mr. Daley, the criminal prosecution has already been completed and the evidence produced in that case seems to suggest that Mr. Daley was allowed to continue to teach his class in a completely unsupervised manner after credible and deeply concerning complaints were raised against him. At this point, that knowledge and information would arguably give rise to civil liability against Holt Public Schools or any of its officials. The victims and their families should consider looking further into this issue. After all, these claims not only provide important forms of compensation to victims and their families, they also help change the policies and procedures that lead to people like Mr. Daley abusing students.

What damages are recoverable in civil sexual assault claims?

What should Mr. Daley’s victims and families do?

After their courageous involvement with the criminal prosecution that imprisoned Mr. Daley, Mr. Daley’s victims and their families should now turn to consider whether there is any reason for them to contact an attorney to discuss pursuing civil claims related to their abuse. As explained, the details of these cases determine whether they are successful. However, any sexual assault case begins with the family having the courage to step forward and further investigate what happened, so they can make a proper and informed decision about whether to pursue these claims for their child. It should also be noted that the pursuit of these actions is not only important for the victim – it also could help further protect the Holt community from this type of abuse happening again.

If any families in Holt have any further questions about the issue presented in this blog, please feel free to call our firm at 517-394-7500 or email us at intake@sinasdramis.com.