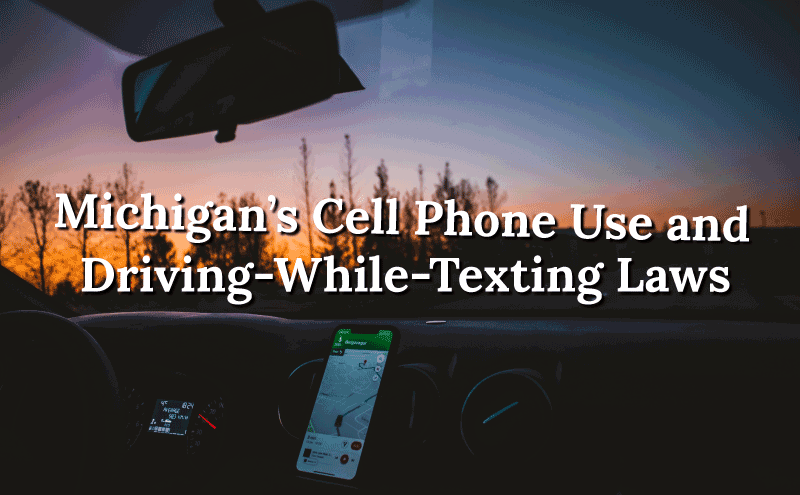 As soon as you see those red and blue lights in your rearview mirror signaling you need to pull over, you start analyzing what you may have done wrong to cause the stop. This is especially true if you weren’t speeding, you’re wearing your seatbelt, and following posted traffic signs – some of the most common causes of traffic stops. What may not immediately pop into your mind, however, is a growing cause for stops: cell phone use behind the wheel.

As of right now, there is no statewide hands-free law in Michigan. However, because distracted driving accidents are on the rise, local communities are beginning to take matters into their own hands by enacting local ordinances requiring hands-free cell phone use. This article outlines some basic things you need to know about state laws and local ordinances dealing with cell phone use while driving, as well as how distracted driving may affect the outcome of an auto liability case should you ever be involved in an accident.

According to the Virginia Tech Transportation Institute, text messaging increases the risk of a crash or near-crash by 23.2 times. The same study found that dialing a handheld cell phone while operating a vehicle caused the driver to become 12 times more likely to crash. With these statistics in mind, it’s easy for anyone to see why prohibiting the use of a hand-held phone while driving would be beneficial. However, the advent and availability of hands-free technology have caused many to wonder what kind of cell phone use, if any, is permissible while driving in Michigan.

Is it Illegal to Use a Cellphone While Driving in Michigan?

Can I Text While Driving?

MCL 257.602b(1) and (2) prohibits all drivers, regardless of age, from texting while driving. The law specifically states that drivers may “not read, manually type, or send a text message on a wireless 2-way communication device that is located in the person’s hand or in the person’s lap, including a wireless telephone used in cellular telephone service or personal communication device.” Penalties for violating this law include civil infractions and expensive fines that increase with each offense.

Can I Make Calls While Driving?

Can I Use Hands-Free Technology to Text or Make Calls While Driving?

Whether hands-free technology is permissible while driving remains unclear in Michigan. Michigan’s current anti-texting law only speaks to handheld devices in a person’s hand or lap. Importantly, this law leaves out any mention of hands-free, voice-operated, or mounted devices within the vehicle. Kelsey’s Law is also unclear, as the prohibition against teens texting or making calls while driving does not address whether the teen driver is permitted to use hands-free technology. However, Kelsey’s Law does carve out an exception for teens using a “voice-operated system integrated into the motor vehicle.”

The current laws in Michigan about distracted driving are written very specifically regarding texting. However, cities have the ability to create their own local ordinances, and many are much stricter than state law. In Battle Creek, for example, a local ordinance prohibits the hand-held use of a phone while driving, which includes scrolling, typing, and speaking. The law is in effect within the boundaries of the city of Battle Creek, with signs posted at entry points to the city to notify drivers. Battle Creek is not alone in enacting its own stricter distracted driving laws. The city of Troy and Detroit have also passed ordinances that expand existing state law. As more Michigan cities begin to take distracted driving into their own hands, it is important to stay alert to posted signs prohibiting the use of hand-held phones within city limits.

Dangers of Distracted Driving, Hands-Free Or Not

While current Michigan law allows licensed drivers to make calls while driving and proposed laws may allow a hands-free exception for texting, it is important to remember that distracted driving is extremely dangerous. While your use of a cellphone while driving may not be illegal under state or local law (depending on your age and location), distracted driving could still get you in trouble in the event of an accident. In fact, a driver’s use of a cell phone can be considered a negligent act that can hold the driver liable for harm caused in an accident. Therefore, the bottom line is that it’s never ok to drive distracted. When it comes to the safety of yourself, your passengers, and fellow drivers of the road, no call or text is worth the risk.