Should I Seek Medical Treatment After a Car Crash? 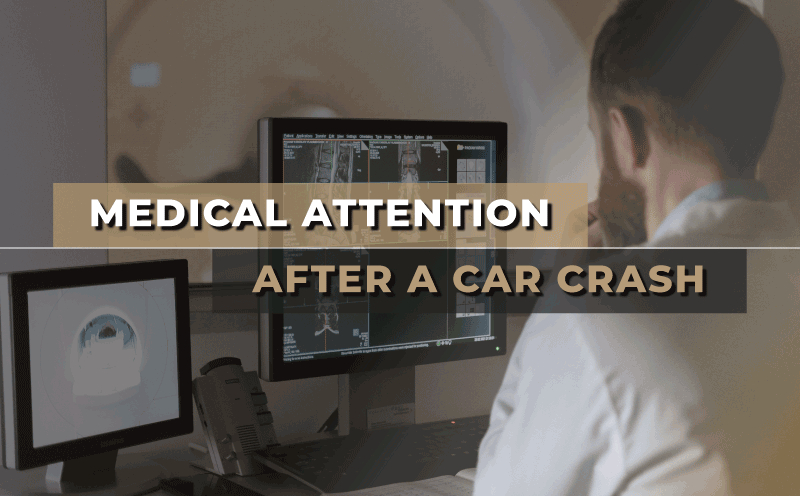 It is a scenario that repeats itself over and over. An individual is involved in a motor vehicle crash. The vehicle they were driving or riding in is damaged. They sustain what appear to be only minor injuries – cuts, bruises, maybe a headache or stiff neck, sore back, or possibly joint pain. In the confusion and emotions right after the impact, the adrenaline rush allows you to focus on the extent of damage to your vehicle and who was at fault in causing the crash. When the police arrive, they may ask you if you are “okay” or if you need medical treatment. The police or witnesses may even offer to call an (expensive) ambulance, which you might feel tempted to reject (too expensive). Instead, you tell the police officer you do not need medical treatment and fully believe you just need a chance to settle down and let your sore body recover. You don’t go to the hospital, urgent care, or your primary care doctor. Instead, you go home and wait to feel better. Many people do this – forego seeking medical treatment after a car crash. However, Michigan car crash lawyer, Steve Weston, whose experience handling car accident claims spans several decades, outlines the importance of medical evaluation to not only help identify potentially serious injuries from crashes but also to help preserve an injured person’s access to no-fault PIP benefits.

As the days turn into weeks, you struggle to function at work. Your headaches don’t get better and, in fact, seem to get worse and more frequent as time goes on. You also notice that your lower back and left hip have become increasingly painful to the point physical activity that you enjoyed before your car crash is now out of the question. You are not sleeping through the night. Emotionally, you do not feel very stable and experience excessive highs and lows and angry outbursts at your family, coworkers, and friends for no apparent reason.

Finally, you go see your doctor who orders imaging for your brain, neck, back, and left hip. It has been a long four months since the crash and you are finally getting the professional help and diagnostic testing you have put off. You receive the billing for all of the testings from your auto no-fault insurer. Every bill and expense is denied by your auto insurer, with the explanation that these expenses are unrelated to your automobile accident. The insurer claims that the statements you made to the police and others at the scene do not support relating your medical issues to the crash.

Importance of Seeking Medical Treatment After a Car Crash

Similar tragic scenarios play out across the state of Michigan every month. It is normal for a person to not want to be “dramatic” or to seek medical treatment after a car crash. This is especially true when the soreness, pain, and injuries do not seem serious.

Yet, it is also normal for the sudden release of adrenaline to mask the extent of injuries that pain is signaling exist. And, as seen in the common scenario described above, no medical assessment means no documentation of symptoms and locations of discomfort that may later signal serious injuries. Frequently, headaches won’t resolve, short-term memory or emotion swings become problematic. Mental fatigue and worsening joint, back, or other physical issues become more severe. It is not at all unusual for a person to be diagnosed with a traumatic brain injury (TBI) weeks or months after a crash. Note that a TBI can occur even though there was no impact of the skull on another surface. Spinal vertebrae and discs anywhere along the spine may be damaged by the sudden force of a crash. Documenting these areas of pain soon after a crash will help show the relation in time to the crash.

Michigan’s No-Fault Act requires that, in order to recover benefits, including wage loss, replacement services, and allowable expenses incurred for care, recovery, and rehabilitation, there must be an accidental bodily injury that arises out of the operation, maintenance, or use of a motor vehicle. This is why early medical documentation and follow-up treatments are so important.

People who fail to seek medical treatment after a car crash do not create a record of the fact of pain, soreness, and injury from the crash. In these unfortunate instances, insurance providers gain a stronger foothold to deny claims for auto no-fault PIP benefits.

Seeking early medical treatment after a car crash will not only help preserve your ability to obtain no-fault benefits, it may also result in the identification and treatment of an injury that is more serious than initially thought.

This article was authored by Kalamazoo area personal injury lawyer, Steve Weston. While Steve is dedicated to representing clients in a variety of personal injury claims, he has spent much of his career helping those injured in motor vehicle accidents in Kalamazoo, Battle Creek, Portage, and throughout the state of Michigan.

What to Do After a Car Accident in Michigan