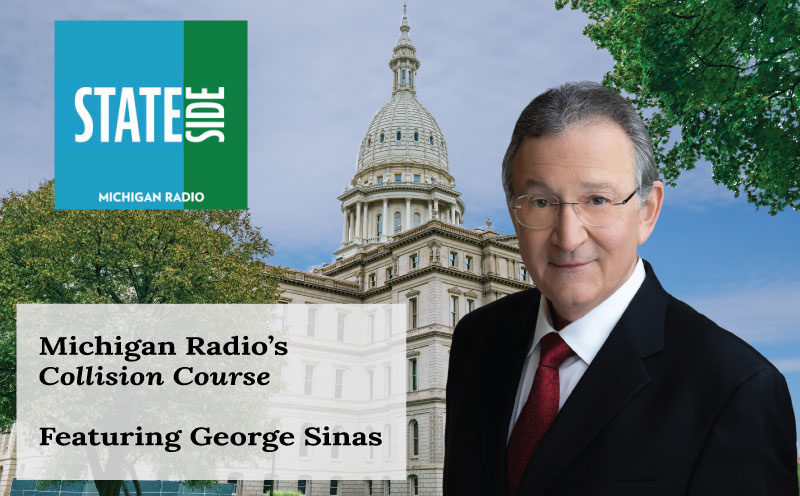 As we near the three-year anniversary of Michigan Governor Gretchen Whitmer signing Michigan auto no-fault reform legislation into law, we are once again reminded of the mess and destruction that signature has caused for a system that was once considered one of the best in the country. If you have not yet had the chance or heard, Sinas Dramis Law Firm recommends you check out a new mini three-part series on Michigan Radio’s Stateside podcast entitled Collision Course. We have descriptions and links to the stories that have aired in that series posted for you below, the second and third of which feature Michigan auto accident attorney and no-fault expert George Sinas. The series helps show those who are not aware how these laws have negatively impacted thousands across the state who have been injured in a crash, and how and where the law and efforts to change it currently stand.

The first episode of the mini-series introduces you to someone hockey fans in Michigan already know, and if they know him, they know his story: Detroit Red Wings Hockey star Vladimir Konstantinov, who helped lead the team to a Stanley Cup victory in 1997. Shortly after the win, Konstantinov was involved in a serious car crash, where he suffered a traumatic brain injury, beginning a new lifelong battle off the ice. As the episode explains, while Konstantinov survived the crash, he now requires round-the-clock care, and that care was paid for under Michigan auto no-fault benefits for more than 20 years. Now, following the 2019 reform, he, like thousands of other crash survivors, is in jeopardy of losing that care if there is not a fix to no-fault reform. You can listen to Collision Course episode one at the links above. For more additional resources about Michigan’s no-fault laws and why it is important to speak with a competent Michigan auto accident attorney if you are involved in a crash, check out the links below.

Collision Course Episode 2: A Fault of Our Own

Episode two of the three-part podcast series covers the history of Michigan auto no-fault law, from where it first began to the signing of the reform on May 30th, 2019. Sinas Dramis Law Firm partner and no-fault expert George Sinas, who continues to challenge the legality of the reform, is featured in this episode to help explain the history behind the law and how it has changed. George explains that the original concept of the state’s auto no-fault law was born at a time when motor vehicle accidents were at an all-time high, and despite people having insurance, their expenses were not covered after a crash due to the tort liability system in place. That system meant that a victim could recover expenses and damages from only the other driver if they were at fault. Thus in 1972, Michigan lawmakers implemented the no-fault system, and unlike any other state using a no-fault system, guaranteed everyone lifetime uncapped medical coverage with their policy. Unfortunately, the system faced opposition, and a decades-long political debate was born. As described by Collision Course host, April Baer:

As we know, in 2019, that debate saw action, and reform was signed into law, unleashing a slew of problems in its wake for crash survivors like Vladimir Konstantinov. That led to a lawsuit by Sinas Dramis Law Firm, called the “Andary” case, filed on behalf of three of its clients, challenging two provisions of the reform. The first challenge is to the 55% medical fee schedule, and the second is the 56-hour per week cap on in-home family-provided attendant care.

For a full summary of how no-fault reform was passed, be sure to listen to Part 2 of Collision Course in the links above. You can also find links for updates on the Sinas Dramis-led charge to challenge no-fault reform and resources to help you understand the law changes.

Picking up where episode two left off, episode three of Collision Course looks at the fallout of Michigan auto no-fault reform, and what it could mean for the 1,500 catastrophically injured people living in Michigan today. It also looks at the call from survivors, their families, and advocates to change the law as it stands. The quickest and easy way to fix the broken parts of the reform would be for the state legislature and governor to come together and pass revisions to the law. Unfortunately, the bills created by several lawmakers looking to do just that have hit a wall, in the form of Republican leadership. House Speaker Jason Wentworth has stated his desire to “move on,” and has no plan to advance anything in the House. Sinas Dramis Law Firm partner George Sinas, also featured in this episode, re-iterated the firm’s stance, that these changes to the law “should never have been permitted,” and how he feels the Andary case is really the only hope at a fix, but it could take time:

“The Andary case, which is going to be argued soon in the Court of Appeals, is going to address a few of these issues. And then from there, I’m sure it’s going to go to the [state] Supreme Court.”

In the meantime, the episode also takes a cold hard look at what it means for those like Vladimir Konstantinov, waiting for a fix, or a loss of care coverage. The reality is many believe that without a change, it could mean their life. Those who lose their in-home care would be forced to go into a nursing home, where many say, like those closest to Konstantinov, that they will not survive, or not receive the care that has kept them going in the wake of their crash.

For Konstantinov’s complete story, and to help understand what auto no-fault reform means and has done here in Michigan, we at Sinas Dramis Law Firm once again recommend you listen to all three episodes of Collision Course produced by Michigan Radio. We also advise that now more than ever, if you have been injured in a crash, it is imperative that you speak with a Michigan auto accident attorney who is truly knowledgeable about the state’s auto no-fault laws.