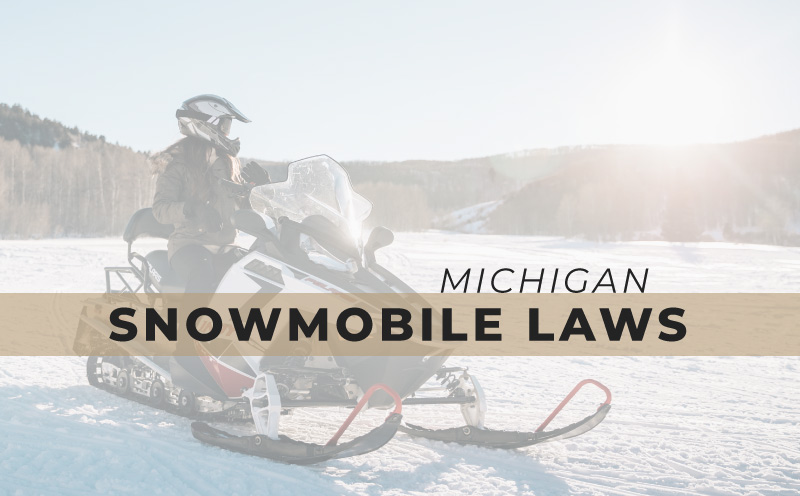 While Michigan winters can oftentimes last for what seems like forever, there’s still plenty of outdoor recreational opportunities this time of year, including snowmobiling. But before hopping on a snowmobile, especially for beginners or inexperienced drivers, it’s important to know the Michigan snowmobile laws, requirements, and safety information that help protect you, passengers, and other riders. Grand Rapids personal injury attorney, Tom Sinas, appeared on Fox 17 “Know the Law” two-part series to explain the laws pertaining to snowmobiles in Michigan, in hopes of improving safety for all. Additionally, Lansing personal injury lawyer, Bryan Waldman, also recently shared some of the more surprising rules pertaining to snowmobiling you may not have heard of. Check it all out below.

Getting Ready for Snowmobile Season

In the first installment of this two-part series, Tom focused on everything riders must know before heading out.

Michigan Snowmobile Trail Permits
If you plan to operate your snowmobile on a snowmobile trail, you must obtain a trail permit. The trail permit is different than the registration. You must also display the trail permit appropriately on the snowmobile above or below the headlight. Trail permits are good for one year.

Safety Certificate
Children between the ages of 12-17 who do not have a valid Michigan driver’s license should obtain a snowmobile safety certificate. Safety certificates are not necessarily required for kids under the supervision of an adult over the age of 21. Children 11-years-old and under must be supervised by an adult unless they’re on property owned or controlled by their parent or guardian. For kids, the best practice is for them to have a safety certificate, in addition to the required registration and trail permit. For every minor no matter their age, if they plan to cross a roadway, they must have a safety certificate.

Michigan law establishes a number of snowmobile equipment standards and requirements. It’s always best to go to the direct resource – Michigan.gov – for a full list and many great resources to learn more about these standards before getting on your snowmobile. Below are a few of the basic equipment requirements:

Brakes – Snowmobiles in Michigan must be equipped with a specific type of brake that will allow the snowmobile to stop not more than 40 feet when traveling going 20 mph for an operator who weighs 175 pounds or more.

Helmets – Michigan has a very specific rule regarding snowmobile helmets. This law states that all passengers and riders of snowmobiles in Michigan must wear helmets that have been approved by the Department of Transportation.

Lights – All snowmobiles must have working headlights and taillights, which must be displayed at all times during the operation of the vehicle.

Heading Out – Snowmobile Laws in Michigan

In the second installment of this special two-part series, Tom discusses getting out for your snowmobile ride, and answers a few of the most commonly asked questions regarding Michigan snowmobile laws and operational information.

Where can I ride my snowmobile?

Private property – Snowmobilers are allowed to operate their sled on their own private land. If you plan to operate your snowmobile on someone else’s private property, you must obviously get their consent first.

Near roadways – Michigan law allows for snowmobilers to ride in the right-of-way of a public highway in a single file line. Only in instances of one snowmobile passing another should there ever be two snowmobiles side-to-side.

Crossing roadways, bridges, and culverts – Snowmobilers can cross a roadway to get from one side to the other, provided that they yield to traffic and do so at a right angle to the road. Similarly, this rule applies when crossing a bridge or going over a culvert on a snowmobile.

What is the speed limit for snowmobiles in Michigan?

Somewhat surprisingly, there is no official speed limit number snowmobiles must adhere to because conditions, weather, and terrain vary so significantly. However, the Michigan snowmobile law states snowmobilers must operate at a reasonable and prudent speed for the conditions. If the snowmobiler doesn’t operate the snowmobile under this reasonable standard, and another person is injured as a result, the snowmobile operator or owner can be liable.

What are my rights if I am injured while snowmobiling?

In some cases, an injured snowmobiler may have the right to sue, depending on the circumstances of their crash. If a snowmobiler doesn’t operate their snowmobile adhering to reasonable safety standards as mentioned above, they can be liable if they injure a passenger or another snowmobiler. Not only can they be held liable for injuries in a civil claim, but they may also be subject to criminal liability in instances leading to serious injuries or death. Additionally, the Michigan Court of Appeals recently decided on an unusual snowmobile case, where a claim was made by an injured rider who claimed that there was something wrong with the private property where he was riding. In that case, the Court of Appeals stated that for such claims, the plaintiff may have to show that the property owner acted with gross negligence or willful and wanton conduct.

Additionally, an injured rider may have a right to a personal injury claim, if the snowmobile is owned by the government, learn more about that on our “Government Liability” page.

Does Auto No-Fault Apply to Snowmobiles?

What about alcohol or controlled substances and operating a snowmobile?

At the end of the day, snowmobiling is largely about using basic common sense, exercising reasonable care, not driving carelessly, and not mixing snowmobiling with alcohol or drugs. However, in the unfortunate event of a collision, our Michigan personal injury attorneys have helped numerous individuals injured in snowmobile-versus-snowmobile accidents and snowmobile-versus-automobile crashes. If you or a loved one have been involved in one of these collisions, we would be happy to discuss your potential claim in a free consultation.

Free Consultation
Talk To Us