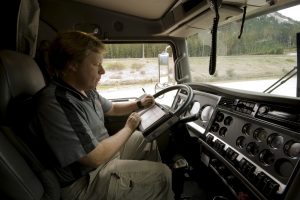 Trucking accidents and unhealthy drivers go hand-in-hand, according to a new study* that finds truck drivers with certain medical conditions have a much greater chance of being in a crash.

It can be challenging for truck drivers to lead a healthy lifestyle, especially those who operate semi-trucks, drive long distances and often spend weeks at a time on the road. Drivers frequently sit for hours behind the wheel, have less-than-ideal sleeping conditions and find it difficult to eat nutritious meals and exercise.

The study’s conclusion? The worse a truck driver’s health, the more likely the driver will be in a truck accident.

The study, conducted by researchers at the University of Utah School of Medicine, revealed that truck drivers with at least three medical problems were more than three times as likely to be involved in trucking accidents, as compared to the overall group. In particular, the study linked the following medical conditions with poor truck driving performance:

Researchers noted that a driver with heart disease may encounter a serious medical situation at any time, including while operating the truck. It was also pointed out that although a condition, like diabetes, may be manageable, that condition in combination with high blood pressure and anxiety may substantially increase a driver’s risk for a semi-truck accident or other large truck collision.

Little research has been performed on unhealthy truck drivers, their involvement in crashes and trucking accident claims. Because occupants of the other vehicles involved in large truck crashes, particularly semi-truck accidents, are injured in about 75 percent of collisions, there needs to be a better understanding of the interplay between trucking accidents and unhealthy drivers.

If you’ve been injured in a collision with a large truck, it’s important that you know the law and understand the trucking accident benefits to which you’re entitled. Contact the Michigan semi-truck accident attorneys at the Sinas Dramis Law Firm for a free consultation.

* The detailed study results can be found in the Journal of Occupational and Environmental Medicine (subscription required).