How is a Supreme Court Justice Appointed?

Posted by Steve and Tom Sinas
in Announcements, In the Media, WLNS 6 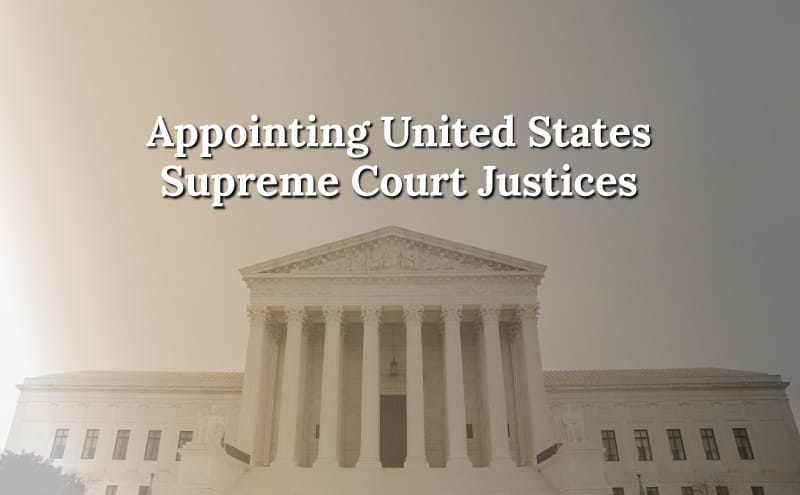 The recent death of Supreme Court Justice Ruth Bader Ginsburg has caused the process of how our Country selects Supreme Court Justices to become a focal point of public discourse. The significance of this process and the importance of an independent judiciary justifies the thought and attention of all U.S. citizens. Every United States citizen should be able to agree that those who decide disputes in our society need to be fair. In professional, college, and high school sports, we all understand the importance of a referee or umpire that will treat both sides fairly and not favor either team. The same should hold true when more significant and important outcomes are at stake, often decided on by federal judges. This article answers the question “how is a Supreme Court justice appointed?” and also discusses the significance of this process.

The United States Constitution (Article II, Sec. 2) authorizes the president to nominate citizens to fill vacancies on the federal judiciary and instructs the Senate to provide “advice and consent” for the nominee’s confirmation.

Essentially, the process of selecting a federal court judge involves the following steps:

The Importance of a non-Partisan Federal Judiciary

Much of the debate over the selection process of federal court judges has to do with the rules regarding the Senate providing “advice and consent.” The Senate’s role in providing advice and consent has largely been determined by rules or practices established by tradition. Over time, these rules and traditions have changed as a result of one political party feeling as though the other has abused the rules.

By today’s standards, past changes in the Senate’s confirmation procedure seem relatively tame. For example, the weight that a home-state Senator’s blue slip has been given has varied throughout history. From 1956 through 1978, and from 2007 through 2017, the policy of the Chair of the Senate Judiciary Committee provided that unless both home State Senators submitted favorable blue slips for the appointee, the nomination would not proceed to a debate or vote before the Senate Judiciary Committee. At other times, failure in obtaining two favorable blue slips was not determinative but was given great weight.

SCOTUS Appointments in the Last Two Years of a Presidential Term

Many believe that the measure of the partisanship of federal court appointees can best be analyzed by looking at the outcome of the appointments made by a President during his last two years in office. The confirmation rate among federal judicial appointments is lower for all Presidents during the last two years in office and the obvious reason is the opposing political party wants to keep as many seats vacant as possible so that if their party prevails in the following election, a President from their party will be able to fill the vacancies. This certainly is relevant to the current debate, which focuses on whether President Trump should be allowed to fill the vacancy of Justice Ginsburg so close to the presidential election

Prior to President Trump being elected, four of our last five presidents served eight years in office (Ronald Reagan, Bill Clinton, George W. Bush and Barack Obama). Further, during the last two years of the Reagan, Clinton, and Obama presidencies, the Senate was controlled by the President’s opposition party. The data regarding the confirmation of these presidential appointments during their final two years in office is enlightening and disturbing. It demonstrates a dramatic shift in the way the Senate handles Supreme Court appointments that started during the last two years of either the George W. Bush presidency or during Barack Obama’s presidency. This data is summarized below.

Democrats argue the obvious – during his last two years in office, President Obama’s nominations were confirmed at a far lower rate than at any time in history. However, Republicans argue that the standoff over judicial appointments started during the last two years of Bush’s presidency. They note that President Bush had a Senate that was controlled by his political party during his last two years in office but had a confirmation rate that was only roughly 2% higher than President Bill Clinton during his last two years in office, even though the opposition-controlled the Senate when Clinton was in office (Bush = 21% v Clinton = 19%). Republicans claim this was largely due to the fact that Democrats abused their power to filibuster federal judicial appointments. As a result, Republicans threatened to amend the Senate Rules to prevent filibustering on judicial appointments. The Republicans never did adopt this amendment to the Senate Rules. Ironically, it was the Democrats that adopted this rule in November 2013 claiming that it was necessary to prevent Republicans from abusing their power by filibustering President Obama’s nominations. However, in doing so, Senate Democrats changed the rule only to prevent filibustering of judicial nominations to the district and circuit courts. In other words, a filibuster would still be allowed for nominations to the U.S. Supreme Court. In April 2017, after President Trump nominated Neil Gorsuch to fill a vacancy on the U.S. Supreme Court, a Republican-controlled Senate changed the rules again and took the final step to completely avoid filibustering for all federal judicial nominations, including those nominated to sit on the U.S. Supreme Court.

As noted in the charts above, when President Obama left office there were a number of federal judicial vacancies that remained unfilled. The most notable vacancy was a seat on the U.S. Supreme Court that became vacant due to the unexpected death of Justice Antonin Scalia. With roughly 11 months left in his presidential term, President Obama nominated Merrick Garland, the Chief Judge of the U.S. Court of Appeals for the District of Columbia Circuit to fill the seat. However, Senator Majority Leader Mitch McConnell and other leading Republicans claimed that it would be unfair and a violation of Senate rules and traditions to allow a vote on a Supreme Court nomination so close to a presidential election.

Senator McConnell is still the majority leader in the Senate. Justice Ruth Bader Ginsburg unexpectedly died on September 18, 2020, just 46 days before the Presidential Election. On September 26, 2020, President Trump announced his intent to nominate Amy Coney Barrett to fill Justice Ginsburg’s seat. Even though this appointment is being made roughly 1 month before the presidential election, Senator McConnell and other Republicans who previously claimed that the U.S. Supreme Court appointment should not be voted on within 1 year of a presidential election have vowed to move quickly and confirm President Trump’s appointment.

Under the laws and traditions of our Country, President Trump clearly has the right to make this appointment, and the Senate has the right to confirm the appointment. However, we can only hope Senators will look at the greater good and realize they have an opportunity to restore the integrity of the judicial branch of our government or to further politicize and deteriorate its credibility. Given the statements and actions of many of these very same Senators just four years ago, should they confirm Judge Barrett to the U.S. Supreme Court? Clearly, the hypocrisy of taking polar opposite positions on the rules that apply regarding U.S. Supreme Court appointments, based on the party of the President appointing a candidate, calls into question the fairness and impartiality of our federal courts.

Indeed, it is no different than having one team decide who will call balls and strikes in a baseball game. If that were the case, fans would have no confidence in the outcome of a game. As a society, we seem to agree that an impartial person should call balls and strikes in a game that is played for fun and entertainment. It is self-evident that we must establish a set of practices that protects the rights of people by ensuring fair and impartial judges preside over cases and that our judicial system is at least as fair as the system we have for baseball.

This article is authored by Lansing personal injury lawyer, Bryan Waldman. He also recently appeared on WLNS 6 “Legal Edge” to discuss this process as well, check it out below.

Why Do We Need A 9th Justice On The U.S. Supreme Court?

Michigan Jury Duty Selection Process and What Happens In the Box