Understanding Your Legal Right to Protest

Posted by Steve and Tom Sinas
in Michigan Laws, WLNS 6 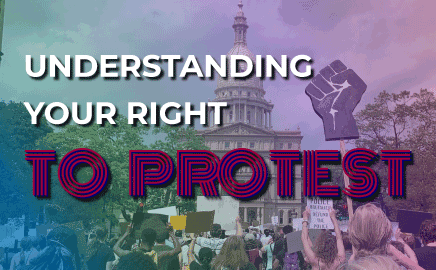 The recent egregious deaths of George Floyd, Breonna Taylor, and Ahmaud Arbery have resulted in an enormous outpouring of emotions across the country. People want to do something to acknowledge that our criminal justice system treats Black people differently than it treats White people, and, as a result, protests have been held in every single state in the last week. Sinas Dramis Law Firm is encouraged to see people exercising their legal right to protest and bring about positive change in this country. However, certain risks are involved when attending a protest, and it’s vitally important protesters understand their legal rights when doing so.

The Right to Protest

The United State Constitution guarantees the right to protest. The First Amendment states:

Congress shall make no law respecting an establishment of religion, or prohibiting the free exercise thereof; or abridging the freedom of speech, or of the press; or the right of the people peaceably to assemble, and to petition the government for a redress of grievances.

The right to protest is rooted in the right to assemble and engage in free speech.

Attorney Bryan Waldman spoke with WLNS 6 this week about the legal rights of protesters.

An individual’s right to protest is greatest when they are in public spaces. This includes streets, sidewalks, and parks. Private property owners are allowed to make rules that apply to their own property, including restricting speech. An example of this is a private movie theater that does not allow people to talk on their cell phones while in the theater or a private concert venue that does not allow photography.

The Rules that Apply to Police Officers at Protests

The primary role of police officers at protests is to protect and preserve the protestors’ rights to engage in protests and the exercise of their free speech. To perform this role, police have an obligation to de-escalate any threat of violence. As a final resort, the police may issue an order that the crowd is to be disbursed. In order to issue a disbursal order, there needs to be a clear and present danger of a riot, interference with traffic, or some other immediate threat to public safety. If a disbursal order is issued, police must do so in a way that notifies protestors and gives them a reasonable opportunity to comply with a disbursal order.

Taking Photos and Videos at Protests

Generally speaking, people can take photographs and videos of the acts and words of others when there is not a reasonable expectation of privacy. This means that if a person is lawfully in a public space, they have the right to take photos or videos of anything in plain view, including police activities. Police can order people to stop any activity, including taking photographs or video, if the activity interferes with legitimate police activities or operations. However, taking a photo or video recording from a reasonable distance is unlikely to interfere with legitimate police operations.  It is also important to note that police do not have the right to look at your phone, view photographs or videos, or take possession of photographs or videos without first obtaining a warrant.

Crimes Committed During a Protest

A crime committed during a protest is still a crime. The overwhelming number of people who have attended recent protests have done so in a peaceful and legal manner. However, crimes have also occasionally been committed at these events. Oftentimes, people attend protests with no intent to join the protest itself, but only to use it as an opportunity to break the law. Additionally, some people attend these protests with the intent of instigating violence or criminal conduct by protestors. It is important for those that attend protests to be prepared for these situations, not give in to instigators, and steer clear of any criminal activity.