In many cases of sexual assault or abuse, perpetrators take advantage of their position within an institution to prey on victims. Institutional sexual assault is often perpetrated by an employee or agent of a facility entrusted with the victim’s well-being. Due to high vulnerability – such as a patient seeking medical care, a student on campus, a young member of a religious organization, or an elderly patient in a long-term care facility – these situations can lead to sexual assault or abuse when institutions and organizations fail to take proper precautions in protecting their members.

Protecting People When Organizations and Institutions Fail To

Sexual assault cases against institutions are pursued under the civil justice system, allowing survivors to receive monetary compensation directly from the institution for their injuries, harm, losses, and other damages that resulted from the assault. Institutions can include schools, universities, hospitals, medical clinics, churches, or assisted living facilities.

Institutional sexual abuse cases are incredibly complex and are best handled by an attorney experienced in these matters. For example, depending on the type of institution, survivors may be limited in the justice they are able to receive. This applies to governmental institutions, including public school systems and universities, that are subject to certain immunities that bring additional complexity to these cases.

We hear you, we believe you, we’re here to help.

Fill out the online form.

Use the following dropdowns to learn more about various types of institutional sexual assault and the legal rights of survivors:

Sexual assault is a serious problem for students at all educational levels. Both student-on-student and employee-on-student sexual assaults occur frequently around the country. For this reason, it is imperative that educational institutions take the initiative to eliminate sexual assault from their campuses. This is done through the adoption and enforcement of policies designed to prevent assault and keep students safe.

However, the unfortunate reality is that many educational institutions unreasonably deny and ignore the warning signs of sexual assault occurring within their school. Too often, schools fail to respond effectively to real incidents even after adopting anti-sexual assault policies. An educational administration’s ignorance, fear of liability, and concern about public perception can cause the institution to downplay or altogether deny credible reports of sexual assault. Victims need to understand their rights. You have the right to safety on campus. You have the right to speak your truth when something goes wrong. And you have the right to hold your school accountable for sexual misconduct when they fail to keep you safe.

Legal Rights for Survivors of Sexual Assault in Educational Institutions

It is important for survivors of sexual assault to understand their legal rights and options for recourse arising from sexual abuse within an educational institution. Title IX is a federal civil rights law that was passed as part of the Education Amendments Act of 1972. The law prohibits discrimination in educational institutions receiving federal funding assistance (i.e. public schools and universities). Further, the law considers sexual assault as a form of gender discrimination, thereby providing a path for recourse directly from an educational institution that failed to protect its students. Specifically, Title IX “is enforceable through a judicially implied private right of action, through which monetary damages are available.” Doe v. Miami Univ., 882 F.3d 579, 589 (6th Cir. 2018).

The United States Supreme Court has recognized the private cause of action arising from an educational institution’s violation of Title IX for deliberate indifference in the context of both teacher-to-student and student-to-student sexual assault. The seminal case involving a school’s liability under Title IX for employee-student sexual discrimination is Gebser v. Lago Vista Independent School District, 524 U.S. 274, 118 S.Ct. 1989, 141 L.Ed.2d 277 (1998). In Gebser, a high school student and her parents sued a school district for damages under Title IX, alleging that a teacher sexually harassed her. The Supreme Court rejected the use of agency or negligence principles to render the school district liable for monetary damages under Title IX. See id. at 1997. Ultimately, the Court held that a school district may be held liable for damages under Title IX, but only if an “appropriate person” within the district had “actual notice” and was “deliberately indifferent” to the underlying violation. Id. at 1999.

The following year, a school’s liability under Title IX for student-student sexual discrimination was addressed by the U.S. Supreme Court in Davis v. Monroe County Board of Education, 526 U.S. 629, 119 S.Ct. 1661, 143 L.Ed.2d 839 (1999)). In Davis, the mother of a fifth-grade student brought a private action against the school for monetary damages, alleging that her daughter had been the victim of sexual harassment by another student in her class. The issue before the United States Supreme Court was whether a private damages action may lie against the school board in cases of student-on-student harassment. The Supreme Court held that a private Title IX damages action may be brought against a school board in cases of student-on-student harassment, but only where the funding recipient is deliberately indifferent to sexual harassment, of which the recipient has actual knowledge, and that harassment is so severe, pervasive, and objectively offensive that it can be said to deprive the victims of access to the educational opportunities or benefits provided by the school. Id. at 663.

Both the Gebser case and Davis case confirm that an educational institution may be held liable for sexual assault within the institution or one of its programs if the following elements are met: (1) the student suffered sexual harassment, (2) the funding recipient had actual knowledge of the sexual harassment, and (3) the funding recipient was deliberately indifferent to the harassment.

A. FIRST ELEMENT – DEFINITION OF SEXUAL HARASSMENT UNDER TITLE IX

The definition of sexual harassment under Title IX is set forth in the Code of Federal Regulations, 34 C.F.R. 106.30, which states as follows:
Sexual harassment means conduct on the basis of sex that satisfies one or more of the following:

(ii) Unwelcome conduct determined by a reasonable person to be so severe, pervasive, and objectively offensive that it effectively denies a person equal access to the recipient’s education program or activity; or

A recipient with actual knowledge of sexual harassment in an education program or activity of the recipient against a person in the United States, must respond promptly in a manner that is not deliberately indifferent. A recipient is deliberately indifferent only if its response to sexual harassment is “clearly unreasonable in light of the known circumstances.” 34 C.F.R. 106.44(a). Generally, this inquiry is determined on a case-by-case basis considering the totality of circumstances regarding the educational institution’s response.

If you feel you’ve experienced campus sexual assault or abuse by an employee or fellow student, we’re listening.

When you go to the doctor, dentist, therapist, or other health professionals, you trust them to treat you with dignity, respect, and provide essential health care. However, many patients all over the country have experienced inappropriate sexual conduct during medical treatment. Quite often, patients are confused as to what is proper conduct regarding their medical procedure.

Best practices for medical treatment involving sensitive areas of the body include a thorough explanation of how the treatment will be performed before it is performed, a chaperone present during the treatment of any sensitive area, informed consent, time for questions and answers between medical providers and patients, and the ability for the patient to have a trusted family member or friend in the room during examinations.

If you’re a patient, you should always fully understand your medical treatment and why certain exams are recommended. Medical providers should never rush through an explanation or pressure you into treatment. If you do not feel comfortable with a proposed treatment plan, seek a second opinion.

You should never have to question if you were sexually assaulted during medical care. Common warning signs of sexual assault during medical treatment include:

If you feel like you’ve experienced some of these warning signs, or were otherwise sexually assaulted at a medical institution, you should raise your concerns and seek help immediately.

Residents of nursing homes and other assisted living institutions are often vulnerable to sexual abuse due to health conditions that impair their physical and mental capabilities, as well as social, economic, family involvement, and other factors. Sexual assaults are alarmingly unreported in nursing homes and assisted living institutions because many victims cannot adequately document and discuss the abuse. Signs of sexual abuse may include unexplained bruises or marks on the body, fearful or intimidated attitude, or abnormal behavior. Frequent visits from friends and family can be key to detecting these warning signs. However, the ultimate burden of protection falls on the facility itself. Assisted living institutions have the responsibility to create and implement proper training and policy to keep residents safe. If they fail to do so, the institution may be liable for the assault of residents by staff and employees.

With allegations of institutional sexual assault by clergy members making headlines all over the country, there is undoubtedly a serious issue of abuse occurring within religious institutions. Sexual abuse frequently occurs in religious schools, orphanages, and missions, churches, temples, mosques, presbyteries, and rectories, confessionals, as well as various other secular settings. This long-standing problem has been consistently shrouded in secrecy, cover-up, and lack of accountability. Contributing to this problem further is the rigid structure of religious institutions, inefficient internal control, and various belief conflicts.

Anyone who grew up as a member of a religious institution knows that it takes a tremendous amount of courage for a victim to come forward. Many victims worry their religious institution will cast them out or they’ll face negative repercussions from their allegations. These victims need to understand their right to be free from harm. This problem is finally gaining national attention and many religious institutions and society, in general, understand this right. In addition to increased media attention, as well as an academic interest, community initiatives and advocacy groups have formed to assist victims of clergy sexual abuse.

Those who’ve experienced sexual abuse in a religious institution should seek support from family, friends, and community organizations. It’s your right to come forward, share your experience, and help prevent these injustices from occurring in the future.

If you or a loved one are a victim of sexual assault, you deserve justice and support in moving forward. Contact us at the link below or call us at (517) 394-7500 for a confidential and free initial case review.

If you’ve experienced institutional sexual assault of any kind, you’re likely feeling alone, vulnerable, and overwhelmed. But you have the right to your own safety and well-being. And when someone takes that away from you due to the failures of an institution or organization, it’s also your right to pursue civil damages and compensation.

The institutional sexual abuse lawyers at Sinas Dramis Law Firm have experience handling these complicated and complex cases. With an approach that focuses on the overall well-being of our clients, you will feel heard and understood when you contact us. You can continue pursuing your life to the fullest while we passionately seek legal remedies for the abuse you’ve experienced. 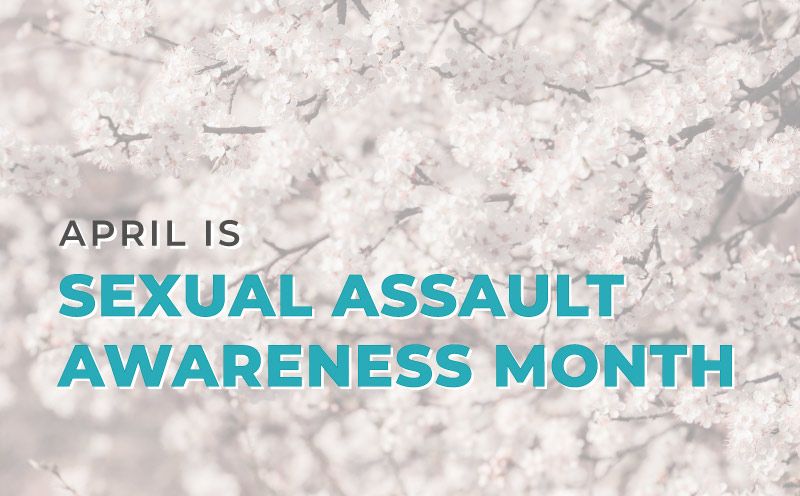 The topic of sexual assault is everywhere in the news …

Former University of Michigan students who have come forward in … 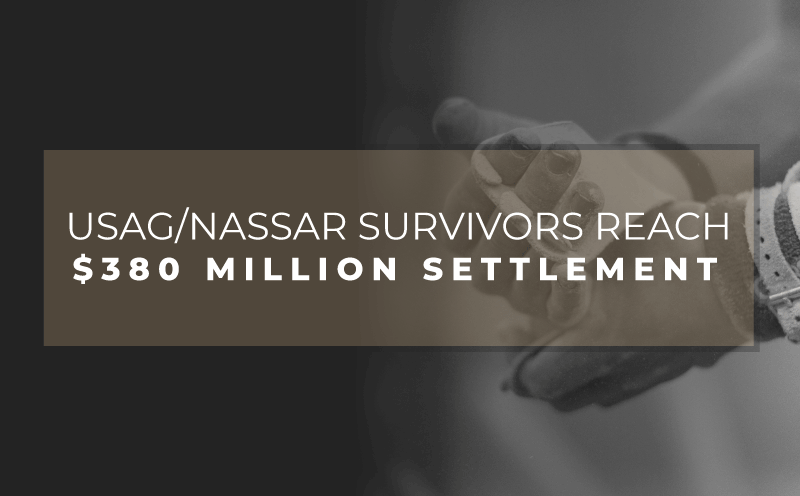 Survivors of Larry Nassar have reached a historic $380 million …

Federal laws and sexual abuse laws in Michigan aim to …