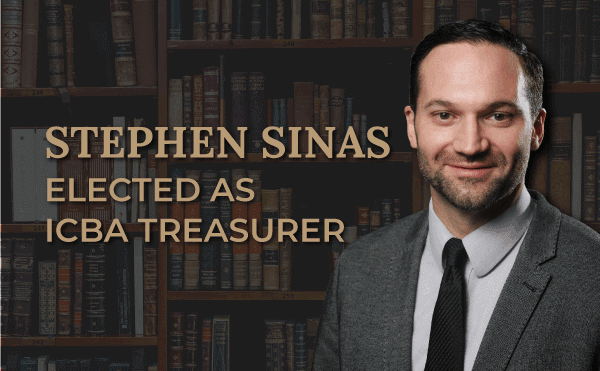 We are pleased to announce Lansing personal injury lawyer, Stephen Sinas‘, recent election as Ingham County Bar Association (ICBA) Treasurer. Steve has served on the ICBA board since 2017, and last year he served as ICBA Secretary. Steve’s term as Ingham County Bar Association Treasurer runs from July 1, 2020, through June 30, 2021. In this new role, Steve will expand his existing relationship with the Association and continue to promote, share, and support its mission. In addition to his role as Treasurer, Steve will also serve as ICBA’s Committee Chair of Social Media and Co-Chair of Membership.

A Passion for Serving the Lansing Legal Community

Steve helps orchestrate a variety of the firm’s Lansing-area community events, including our annual Lansing Lids for Kids bicycle helmet giveaway and People’s Law School, a multi-week course hosted every fall and open to the public to learn more about the law.

A Career Dedicated to the Lansing Community and Beyond

In addition to Steve’s commitment to serving the Lansing community, he is also passionate about serving the public in various other ways. He serves as an Executive Board Member for the Michigan Association for Justice, a Board Member of the Michigan Brain Injury Provider Council (MBIPC), and Legal Counsel for the Coalition Protecting Auto No-Fault (CPAN). He also previously served as a Member of the State Bar of Michigan’s Character and Fitness Committee (District E).

Steve fully embraces the Sinas Dramis belief that attorneys must passionately promote access to justice and work to educate the public about the law. Steve hopes his ongoing service to ICBA will help him further this mission.

Congratulations, Steve, on this well-deserved election!