Car Crash Caused by Bright Headlights: Who is at Fault? 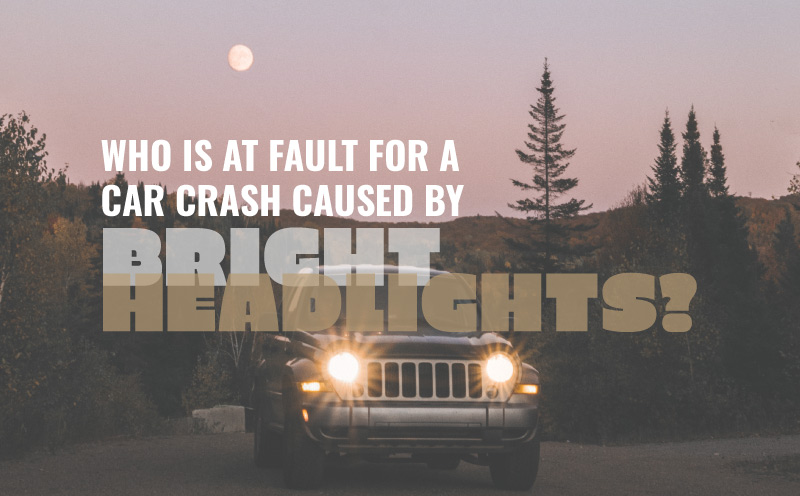 All drivers know how unsettling it can be to encounter an oncoming vehicle with bright headlights, especially late at night and on dimly lit roads.  This is an experience with which every driver is all too familiar, and a common cause of car crashes throughout the country.

Unfortunately, despite how common these crashes are, it is often difficult for a person injured in one to determine if he or she can pursue legal action against the at-fault driver. Potential claims could be filed against (1) the driver of the vehicle whose headlights caused the crash, (2) the owner of the vehicle whose headlights caused the crash, if different than the driver, and/or (3) one’s own automobile insurer. Given these numerous legal avenues and the complexity of these types of cases, it is especially important that you contact an experienced personal injury lawyer if you or a loved one is involved in a crash caused by bright headlights.  The lawyers at the Sinas Dramis Law Firm have over 70 years of experience dealing with complex cases such as these and have put together this guide to help victims of a car crash caused by bright headlights better understand their legal rights.

Can I Sue Someone for My Injuries from a Car Crash Caused by Bright Headlights?

If a motorist encounters an oncoming vehicle with excessively bright headlights, and if those headlights cause the motorist to lose sight of the road and crash, it can be difficult afterward to prove that the bright headlights—as opposed to any other factor—were, in fact, what caused the crash. In other words, it can be difficult to determine who was actually at fault for the crash—a critical determination that must be made if the injured motorist wishes to pursue legal action against the driver of the oncoming vehicle.

Such a determination often boils down to basic principles of negligence and liability—in other words: all drivers owe a duty to everyone else on the road to operate their vehicles safely and in a way that will not create an unreasonable risk of harm to others. If they breach this duty by driving in an unsafe or reckless manner, and if that breach results in injury to others, they can be held liable—i.e. sued—for doing so.

When Can Drivers Be Held Liable for Bright Headlights?

Therefore, a motorist injured in a car crash caused by blinding, oncoming headlights may pursue legal action against the driver of the oncoming vehicle. However, in order to do so, he or she must prove that the other driver had excessively and illegally bright headlights installed on their vehicle, or had the vehicle’s high-beam headlights activated at the time of the crash.  Proving this can be extremely difficult and often requires extensive factual development and even expert analysis. That, again, is why it is extremely important to contact an experienced attorney who specializes in these types of cases if you or someone you know is injured in such a crash. Specifically, you should look for an experienced Michigan motor vehicle collision lawyer specializing not only in vehicle crash investigations but one who is also well versed in the many nuances of Michigan’s complex auto insurance law.

What Happens Someone’s Bright Headlights Cause Me to Crash My Motorcycle?

Many times, it is a motorcyclist who is injured in a crash caused by bright headlights. In this specific subset of cases, motorcyclists must not only be aware of their rights with regard to the at-fault driver but also of the specific challenges they may face when claiming no-fault personal injury protection (PIP) benefits from the highest priority automobile insurer. This is because motorcycles are not recognized as “motor vehicles” for purposes of Michigan’s no-fault act, and, as a result, motorcyclists are generally not able to recover PIP benefits if they are injured in a crash—that is, unless an actual motor vehicle (e.g. car, truck, etc.) was also involved in the crash, or if the crash was the product of some hazardous or illegal action taken by the driver of a motor vehicle.

Proving that the blinding glare from excessively and illegally bright headlights caused a motorcycle or motor vehicle crash can be complicated, and preserving one’s legal rights afterward even more so. Individuals injured in these types of crashes often have to pursue no-fault benefits from their own automobile insurance company while also keeping in mind that they may have additional legal rights against the at-fault driver. Few personal injury lawyers have the expertise needed to ensure that an injured person receives the no-fault PIP benefits they’re owed after such a crash, while also pursuing a separate, negligence action against the at-fault driver. The lawyers at the Sinas Dramis Law Firm have that expertise and have over 70 years of experience protecting the rights of the injured in a variety of personal injury and auto liability cases, including those injured in a car crash caused by bright headlights. Request a free auto accident consultation here.