During the past several years, I-94 US-127 accidents in Jackson have become all too common, leading many to speculate why the area has steadily become known as a dangerous road in Michigan.

So far this year, there have been numerous accidents in Jackson near I-94 and US-127. However, one of the most serious incidents occurred in June 2015, when there was a catastrophic nine-vehicle pileup at the interchange, including three jackknifed semi-trucks. The crash sent 11 people to the hospital. And just a few days after that accident, several crashes closed eastbound I-94 between US-127 and Cooper Street.

Notably, I-94 is listed on the National Highway System — a network of roads designated as crucial to the U.S. economy and mobility. As a result, I-94 frequently is the site of car accidents and semi-truck accidents. 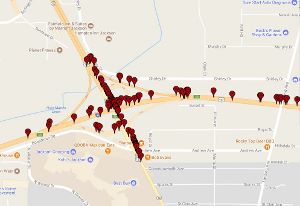 I-94 is a major east-west shipping route between Detroit and Chicago. As such, it sees a fair share of semi-truck accidents, including where the interstate meets US-127 in Jackson, around the Cooper Street exit. Meanwhile, as the above 2015 and 2016 statistics show, passenger vehicles are also involved in many accidents on I-94 and US-127.

Based on an analysis of crash reports and numbers, there appear to be several reasons for so many I-94 US-127 accidents:

To help avoid an accident on I-94 US-127 in Jackson, it is recommended that motorists:

If you’ve been injured in an accident at I-94 and US-127, or anywhere in Michigan, the Sinas Dramis Law Firm is here to help protect your right to no-fault PIP benefits and any other compensation to which you may be entitled. Contact our Lansing car accident lawyers or Grand Rapids auto accident attorneys today for a free consultation.