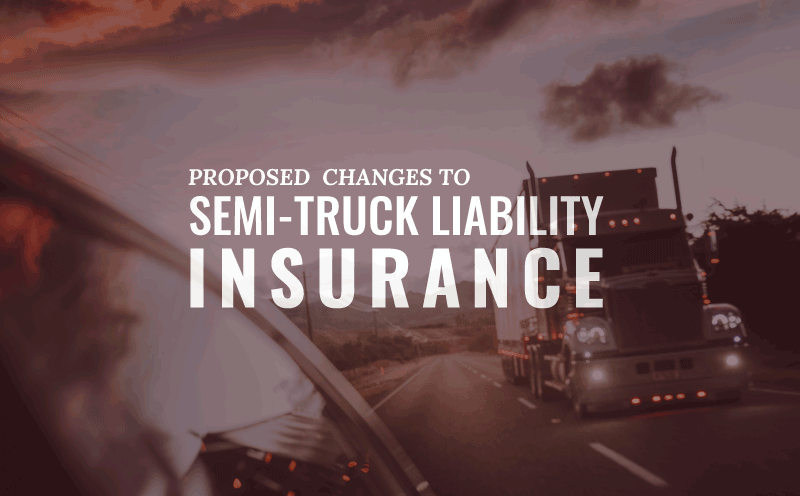 Talks in Washington D.C. regarding the country’s infrastructure have included possible changes to semi-truck liability insurance requirements. Grand Rapids personal injury lawyer, Tom Sinas – who has skillfully handled numerous semi-truck accident cases throughout the state of Michigan – broke down potential changes in a Fox 17 “Know the Law” segment. He notes that these changes are especially interesting based on their intersectionality between Constitutional law, insurance law, and personal injury law. Furthermore, toward the end of the segment, he goes on to describe the important impact this change could have on Michigan motorists in light of the 2019 changes to Michigan’s auto no-fault law.

When discussing semi-trucks, we have to recognize that these vehicles often involve interstate travel or travel between states. Under the United States Constitution, Congress in Washington has the ability to regulate interstate commerce. Therefore, Congress has the ability to regulate trucks and commercial vehicles that cross state lines. Additionally, Congress has been regulating semi-trucks for a long time, publishing and regularly updating the Federal Motor Carrier Safety Regulations Handbook. This handbook sets forth all regulations and insurance requirements for semi-trucks and other commercial motor vehicles.

As of the publication of this segment and article (June 2021), in the course of the infrastructure talks going on in Washington D.C., a recently proposed bill would change the minimum requirement of liability insurance for semi-trucks and other commercial motor vehicles crossing state lines. If passed, the bill would increase the minimum semi-truck liability insurance requirement from $750,000 to $2 million. Additionally, the bill proposes an indexing system so that this minimum requirement would increase over time to keep pace with inflation.

If passed, this House Bill could be incredibly meaningful for Michigan motorists, especially under the 2019 reformed auto no-fault law. Tom explains that, under these recent changes, people in Michigan can choose less than unlimited medical coverage on their auto insurance policy. In instances of a crash with a semi-truck, if the Michigan motorist opted for

Semi-trucks, given their sheer size, can cause a significant amount of harm. Therefore, victims involved in these types of collisions are at a greater risk for significant and life-changing injuries. As we have discussed in numerous articles and in many of Tom’s previous “Know the Law” segments, Michigan motorists can now choose less than medical expense coverage on their auto insurance policies for the first time since the passing of the Michigan Auto No-Fault Act in the 1970s.

The following is an example of what this could look like in the real world:

Alex is catastrophically injured in a collision with a semi-truck. Alex chose a capped $250,000 medical coverage auto insurance policy. His care, recovery, and rehabilitation expenses accrue to $2 million over the course of his treatment. He exhausts his own medical expense benefits within the first few days of being admitted to the hospital. The semi-truck driver involved in the collision was found to be at fault for the crash. Below are examples of Alex’s potential financial situation under the current insurance requirements, and again under the proposed change should it pass in Congress.

Due to the significant changes to Michigan’s auto no-fault, we are seeing a significant increase in the interplay between claims for no-fault benefits and liability insurance claims against drivers who caused the accident. This is true also for collisions between personal motor vehicles and semi-trucks as well. The increase in semi-truck liability insurance will factor into this interplay and could be a significant development for Michigan motorists.