What the Data Tells Us About Fatal Car Crashes in Lansing 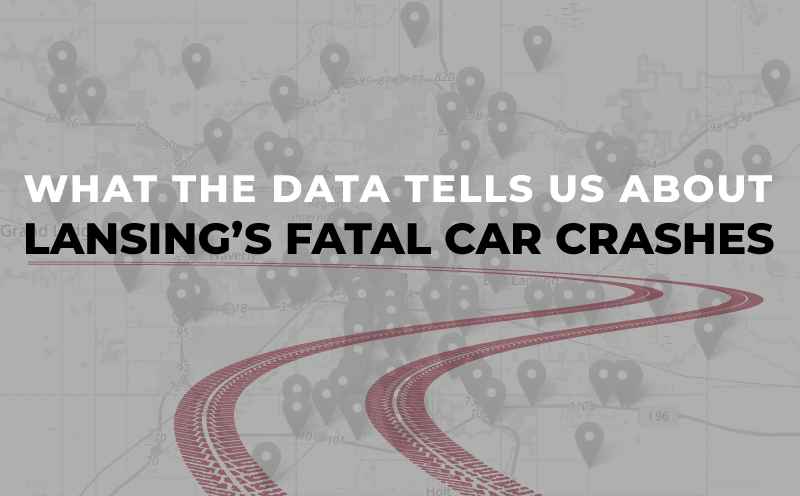 As a personal injury and auto accident law firm headquartered in Michigan’s capital city, Lansing, we have helped thousands of people injured in Michigan motor vehicle collisions since opening our doors more than 70 years ago. We have also helped many grieving family members navigate the legal process in the aftermath of a loved one’s passing in a fatal Lansing car crash.

Statistics show that Lansing roads and the number of fatal crashes that occur on them aren’t getting any better. So what can we do? How can we help protect those we love the most who traverse these roads, highways, and dangerous intersections on a daily basis? In this article, we dive into the data and statistics of fatal car crashes in Lansing to offer insight and information your family can use to navigate the area’s most dangerous roads in the safest manner possible.

What the Data Tells Us About Fatal Crashes in Lansing

As one of Michigan’s largest cities, as well as being the state’s capital, Lansing sees its fair share of serious auto accidents. Relying on data pulled for the years 2016-2020, we find:

As you can see, thankfully, fatal crashes in Lansing seem to be on a downward trend with 2020 having the fewest fatalities of any year in the data sample. However, despite greater awareness surrounding roadway safety, driver distraction, and best driving practices, the overall consistency in these numbers seemingly reflects a continued need for improvement.

Additionally, analyzing the data further regarding fatal accidents in the greater-Lansing area for the last five years, several other interesting takeaways surfaced, including driving conditions, times of day, specific areas around Lansing, and other factors.

What Time of Year is the Most Dangerous for Driving in Lansing?

The first interesting takeaway we noticed was when fatal Lansing crashes occur. Most people would likely assume that the vast majority of fatal crashes in Lansing happen on wintery roads, given that Michigan’s snowy season can be harsh and long. Surprisingly, however, the data reveals that the two most dangerous months for driving in Lansing are right in the middle of summer when road conditions are at their best – July and August, as you can see in the graph below.

Where Do Most Fatal Car Crashes in Lansing Occur?

Secondly, we took a deep look at where these fatal collisions are actually happening around Lansing. Here’s an overview of what we found:

One other statistic of note regarding fatal crashes in Lansing is the fact that 44 of the 106 fatal collisions from 2016-2020 happened at an intersection, signifying the danger and vital importance of paying attention when you’re approaching one.

When is the Most Dangerous Time to Drive in Lansing?

Another huge factor to consider when analyzing traffic crash data is the time of day. Roadways at 1 AM are significantly different than at, say, 8 AM. This is especially true for large metropolitan areas such as Lansing with so many daily commuters on the road. Below is a breakdown of what time of days Lansing’s fatal accidents occur:

As you can see from the data, the worst time to be on Lansing’s road is in the afternoon/early evening. This is likely due to the high volume of commuters in a hurry to get home after work.

Is Speed Usually a Factor in Fatal Crashes?

As mentioned already, a significant percentage of fatal Lansing accidents occurred on highways with 70 mph posted speeds. However, looking at the data, and compiling the most commonly posted speeds in Michigan, you can see a correlation between increasing speeds and risk of fatal collision from 2016-2020:

Looking at this data, it’s easy to see that fatal crashes are more likely to occur at 70 mph than 25 mph. However, two speeds are of important note in this list: 45 mph and 55 mph. A significantly higher number of crashes and fatalities happen on Lansing roadways at 45 mph than 55 mph. This is likely due to the fact that larger, inner-city roadways, streets, and boulevards with many intersections, lane changes, traffic signals, and stop-and-go traffic have posted speeds of 45 mph. In contrast, many 55 mph roads tend to be on the outskirts of towns. These roads tend to have fewer intersections, less stop-and-go traffic, wider shoulders for maneuvering around roadway hazards, and better visibility in the open agricultural spaces surrounding Lansing.

Who is Most Likely to be Involved in a Fatal Car Crash?

Finally, a few interesting data points reveal a little more about who is actually more likely to be involved in a fatal car crash in Lansing. In the last 5 years, males were nearly twice as likely as females to be involved in a fatal collision (197 deaths compared to 98 deaths). Additionally, two specific age groups were disproportionately involved in fatal collisions in Lansing between 2016-2020 – senior drivers over the age of 60 and young drivers between the ages of 15-24. Sadly, in fact, these two demographics alone accounted for 71% of fatalities.

No data reporting on fatal accidents would be complete without mentioning negligent behavior behind the wheel. Of the 299 fatalities in Lansing-area crashes between 2016-2020, 100 of those were killed in a crash where alcohol was involved. Drinking and driving is a serious offense, but despite harsh crackdowns, the truly greatest tragedy in drinking and driving accidents is the potential loss of life. Additionally, distracted driving accounted for another 10 deaths in the same timeframe.

What Surviving Family Members Should Know About Fatal Accidents

Fatal accidents change entire families in the blink of an eye. If your family lost a loved one in a fatal car crash in Lansing, know that we are here for you with resources, information, and above all, compassion.

Under the Michigan Auto No-Fault Act, dependents of the deceased, including spouses and children under the age of 18, may be entitled to what is known as survivor’s loss benefits. These benefits may include compensation for several important losses the survivors suffer, including:

Additionally, if your loved one was killed as the result of another person’s negligent or reckless conduct, such as drinking and driving or texting while driving, know that you, as a surviving family member, may be able to pursue a second and totally separate claim against the at-fault through a wrongful death claim. Through the Michigan Wrongful Death Act, relatives of deceased victims can seek compensation for additional losses.

If you lost a loved one in a fatal Lansing car crash, we are just a phone call away.