The I-96 I-69 interchange in Lansing is a major artery through which hundreds, if not thousands, of motorists travel every day. As such, the interchange has its fair share of fender benders, as well as serious collisions. In fact, the number of I-96 I-69 accidents since 2012 is more than 600, with many of the crashes resulting in severe injuries and fatalities.

During the past two years alone, several deadly collisions have occurred at the interchange, which sits on Lansing’s west side, near Grand Ledge. An I-96 I-69 accident in 2015 killed a 13-year-old boy and injured several of the boy’s family members, who were thrown from the SUV in which they were riding. A two-vehicle crash at I-96 I-69 in 2016 left one passenger dead, while others suffered various injuries. And so far in 2017, numerous accidents causing injuries have occurred at the interchange.

After the deadly collisions in 2015 and 2016, it was hoped the risks associated with this stretch of highway, for both passenger vehicles and semi-trucks, might make people a bit more cautious, prompting them to travel the posted Michigan speed limit and pay closer attention to the roadway — including putting down their cell phones while driving.

Unfortunately, that doesn’t appear to be the case, as the number of accidents at the I-96 I-69 interchange continues to hold steady at more than 100 every year. This is one reason why the area has been designated a Michigan dangerous road. 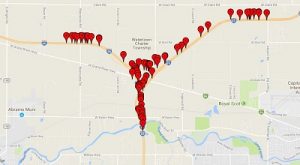 The red pins designate the most recent I-96 I-69 accidents in Lansing.

The I-96 I-69 interchange is an extremely busy area with several exits leading to other heavily traveled roadways, including Saginaw Highway and St. Joe Highway. The interchange sits at what some may call a “crossroads,” because it allows motorists to travel to virtually any part of Michigan. Once at the interchange, motorists can:

There are several factors that make the I-96 I-69 interchange a particularly dangerous area. They include:

Another dangerous factor is this: there is no guardrail separating the lanes of the highway.

Reducing Accidents At The I-96 I-69 Interchange

It has been asserted that the installation of guardrails may help reduce I-96 I-69 accidents. In fact, it was alleged that the 2015 fatal crash at the interchange may have been prevented if a guardrail had been in place, because the crash involved a vehicle that crossed the median and collided with an oncoming vehicle.

While the size and speed of a vehicle can affect guardrail performance, it has been shown that this type of barrier does, indeed, help make roadways safer. Guardrails can also lessen the severity of crashes and, as a result, decrease the severity of a Michigan car accident injury.

Guardrails can be beneficial for other reasons, too. They can deflect a vehicle that has veered off the roadway back onto the road. At times, they can also completely stop a vehicle.

Because a significant portion of I-96 I-69 accidents involve vehicles striking deer, a guardrail may also deter deer from crossing and entering the highway, thereby reducing the number of crashes and injuries.

In the end, the installation of more guardrails on I-96 I-69, and other dangerous roadways in Michigan, would certainly be helpful. In addition, motorists can travel more safely to their destination if they drive the posted 70 mph speed limit, slow down at the exits and avoid distractions while driving.

If you’ve been injured in a car accident at the I-96 I-69 interchange, or on any roadway across Michigan, the Sinas Dramis Law Firm can protect your right to no-fault PIP benefits and help you pursue an auto negligence claim against an at-fault driver. Contact our Lansing car accident lawyers or Grand Rapids auto accident attorneys today for a free initial consultation.