What Happens to Passengers Injured in Drunk Driving Accidents?

Posted by Steve and Tom Sinas
in Motor Vehicle Crashes 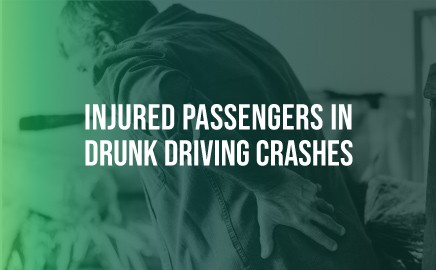 By now, we all know the dangers of drunk driving and the resulting consequences. There’s quite a bit of information available, and Michigan State Police truly don’t mess around with handing out DUIs. The numbers, statistics, and rates of injuries surrounding drunken crashes are downright alarming. And while most of us know what happens to drivers who cause these crashes, what about passengers who knowingly got into a drunk driver’s vehicle? In this article, we review what happens to passengers of drunk driving accidents and what compensation they can pursue.

More often than not, drunk drivers are found at-fault for the collision. This means, when other people get hurt in a drunk driving crash, they potentially have the right to pursue a liability claim against the intoxicated driver. However, with passengers injured in drunk driving accidents, it isn’t always so simple. Oftentimes, the passenger’s relationship with the driver, foreknowledge of the driver’s alcohol consumption, and whether or not the passenger was in a position to refuse the ride are all called into question. For instance, passengers who knowingly got into a vehicle with a driver they knew was intoxicated and did not try to find other means of transportation will be handled differently than the passenger who had no foreknowledge of the driver’s alcohol consumption. In instances where passengers roll the dice, so to speak, and get into someone’s car who’s been drinking, they may actually be held partially responsible for their own injuries.

Enter: the Michigan comparative fault law. This law recognizes that more than one person can be to blame for an accident and resulting injuries. Under this law, the total “fault” can be divided between any number of contributing individuals. However, if a person’s portion of the total amount of fault is greater than 50% – meaning they are primarily to blame for their own injuries – they are barred from seeking any recovery for their pain and suffering. If a jury finds passengers of drunk driving accidents more than 50% at-fault, they cannot pursue a liability claim against the drunk driver.

Under the Comparative Fault Law, demonstrating their injuries are not the result of their own decision to ride with that drunk driver is the biggest hurdle passengers in drunk driving accidents face. Riders who knew the driver was intoxicated yet chose to ride with them anyway will more than likely be found largely responsible for their injuries. This is particularly true in cases where the passenger also supplied the alcohol to the driver.

However, in other circumstances, a passenger’s decision in riding with the intoxicated driver may not be so clear. Perhaps the driver denied they had been drinking or assured the passenger they were safe to drive. In other cases, certain passengers may not be able to refuse a ride. This happens often in instances involving minors. While children may even be aware their parent was drinking, they often aren’t in the position to refuse to ride with them. In other instances, they’re too young to understand the situation.

Not All Fault is Equal

Fortunately, Michigan law recognizes that not all “fault” is equal. Even if a person shares some of the blame for causing their injuries, they aren’t necessarily barred from any recovery at all. Passengers in drunk driving accidents may be found partially at-fault for their own injuries. However, if they aren’t primarily to blame, the total amount of their damages is simply reduced by the percentage of fault they are responsible for. So, for example, a jury finds a drunk driver 90% to blame for the accident. The jury also finds the passenger 10% at-fault for getting in the vehicle in the first place. In these situations, the total amount awarded to the passenger is simply reduced by his or her own 10% share of fault.

Why You Need an Attorney That Specializes in Drunk Driving Cases

This kind of investigation is incredibly complex. We are tired just writing about it! As such, these cases often require an attorney that is experienced in handling drunk driving cases, and it is important for a passenger injured in a drunk driving crash to consult with an attorney experienced in the handling of these types of claims as soon as possible following a crash so that information can be gathered promptly.

If you’ve been injured by a drunk driver, please call us at 517-394-7500 or contact us today. We’ll help protect your rights and make sure you get the compensation your injuries require.