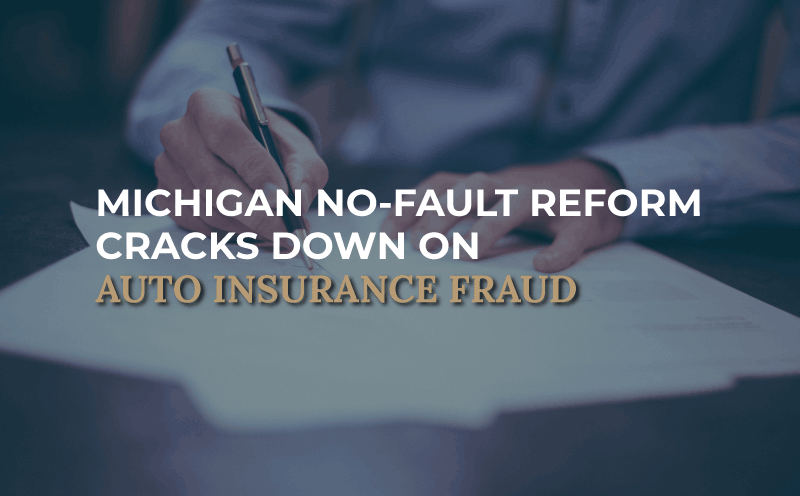 Fraud is an issue in Michigan’s auto insurance industry. Most often, consumers committed auto insurance fraud during the purchasing phase or the benefit claims process.

Upon analyzing the new legislation, it's apparent that the new, stricter rules regarding auto insurance fraud only really apply to consumers and not fraudulent insurance carriers.

When you purchase auto insurance, your insurer asks a variety of questions, including who all lives in your home, where the vehicles are garaged, how and when you use your vehicle, and other similar inquiries. When answering these questions, if the consumer misrepresents any information, the insurance company can accuse you of committing fraud. Later, in the unfortunate event that you have to claim benefits following an auto accident, your insurer can look back at the answers you provided during the insurance purchasing process and deny payment of benefits if any of this information was in any way inaccurate or misrepresented.

Our firm has consulted with injured motor vehicle victims who thought they were entitled to auto no-fault benefits. But, upon looking into their policy and the information they provided during the purchasing process, they find themselves with a voided policy and no payable benefits. Most often, people do not even realize they don’t have coverage until after they were injured in a collision.

It’s important to accurately represent all information. It might be tempting to provide only certain information, but this misinformation comes with dire consequences.

Lansing personal injury attorney, Stephen Sinas, describes the crackdown on auto insurance fraud on WLAJ “In the Name of the Law”

Misrepresentation When Claiming Benefits Under an Auto Insurance Policy

In instances of injuries resulting from automobile accidents, claimants will have to submit a variety of materials, documentation, and resources to their insurer. If any information is inaccurate or misrepresented, the insurer can deny payment of those benefits. Furthermore, misrepresentation of insurance information also opens the claimant up to penalties.

Under our state’s auto no-fault system, auto insurance companies can legally deny fraudulent claims as well as seek payment of their attorney fees accrued in their defense case. Over recent years, a string of Appellate decisions is allowing insurance companies to assess stricter penalties on those committing auto insurance fraud. As a result, if your auto insurance policy contains certain language and clauses, your insurer can not only deny payments of fraudulent claims but void the insurance policy altogether. This means that a person catastrophically injured in a motor vehicle collision will no longer have access to lifetime medical expense benefits.

Fraud Exclusions Do Not Apply to Non-Parties to the Policy

The Supreme Court recently issued a decision in the case of Meemic vs. Fordson determining that fraud exclusions don’t extend to people who aren’t actually parties to the policy. People claiming benefits, such as children, for example, would not be subject to such strict fraud exclusions. On the other hand, this decision still left the question unanswered as to whether or not insurers can exclude policyholders themselves based on fraud. Until the Supreme Court provides further clarity on this issue, it is likely insurers will continue denying claims based on insurance fraud against policyholders.