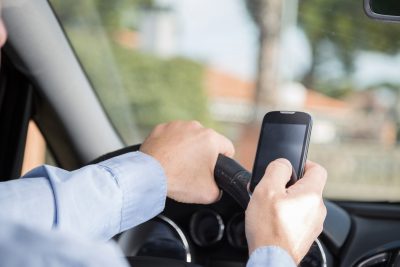 2020 Update: Battle Creek passes a citywide ordinance banning all handheld cell phone use when operating a car. The law was passed in 2019 and went into effect in early 2020. Tom Sinas discusses the new ordinance in first video below.

While the current law on the books in Michigan only applies to text messages, not other distracting apps, and only when the motor vehicle is actually moving, HB 4181 hopes to improve ambiguity of this older statute. The bill, if passed, would prohibit all cell phone use while operating a motor vehicle. Of course, exceptions to this include: calling 911, police use of phones, and utilizing a hands-free system to operate your mobile device. In addition to finally clearing up some particularly gray areas in the law, HB4181 also proposes new consequences for distracted driving involving cell phones. While monetary fines would remain unchanged, HB 4181 also proposes community service for violators.

State lawmakers are ramping up their efforts to crack down on Michigan distracted driving — particularly cell phone use behind the wheel.

Rep. Martin Howrylak recently introduced House Bill 4466, which would toughen current Michigan distracted driving laws by banning the use of hand-held portable electronic devices for anyone operating a motor vehicle. Under the proposal, having a portable electronic device in your hand while driving would be a primary offense, which means law enforcement could pull you over for holding a cell phone or other device.

Cell phones are a leading cause of distracted driving accidents. The National Highway Traffic Safety Administration reports that, during daylight hours, some 660,000 drivers across the country are using their mobile phones at any given time. And according to the U.S. Department of Transportation, drivers who use a hand-held device, such as a cell phone, are four times more likely to get into a crash serious enough to cause injury.

In Michigan alone, there were more than 7,500 distracted driving accidents in 2015. Cell phones reportedly contributed to 753 of those Michigan auto accident deaths.

The existing Michigan distracted driving laws have been on the books since 2010. The statute, known as Kelsey’s Law, makes it illegal for motorists to text and drive.

But enforcement of the current laws has been a bit disappointing, as distracted driving car accidents continue to increase across the state.

So why are existing Michigan distracted driving laws apparently not deterring cell phone use behind the wheel? One reason is the lack of teeth in the penalties that are imposed. Under the current law, a first offense is a $100 fine, a second or subsequent offense is $200 — and offenders get no points on their driving record for a violation.

Rep. Howrylak says he introduced House Bill 4466 because Michigan’s existing ban on texting is “outdated” in light of the fact that people can perform all sorts of functions on their cell phones — not just texting.

“Many drivers are endangering the lives of those around them to send an email, post to social media, or browse the internet,” Rep. Howrylak said in his April 2017 e-newsletter. “My proposal seeks to update the statute to reflect today’s technology and ensure Michigan drivers have their attention focused on the road, instead of a mobile device.”

House Bill 4466 would impose stiffer penalties than current Michigan distracted driving laws. The legislation proposes that drivers caught behind the wheel with a portable electronic device in their hand would face the following consequences:

House Bill 4466 also defines “use” of a portable electronic device as holding that device while doing any of the following:

In this video, Grand Rapids car accident lawyer Tom Sinas talks about House Bill 4466 and what it means for Michigan drivers, if passed by the Legislature.

House Bill 4466 would require drivers to use all portable electronic devices in “hands-free” mode while operating a motor vehicle. But this leads to the question: is hands-free really safer?

The National Safety Council (NSC) says “no,” it is not safer to use hands-free technology while driving. According to the NSC, hands-free devices give drivers a false sense of security because:

The NSC emphasizes that “hands-free is not risk-free” and advises that, to stay safe, drivers must keep their eyes on the road, keep their hands on the wheel and keep their minds on driving.

A recent study conducted by the University of Sussex reinforces the NSC’s skepticism about hands-free devices. “A popular misconception is that using a mobile phone while driving is safe as long as the driver uses a hands-free phone,” says Graham Hole, a psychology lecturer at the University of Sussex in England and an author of the study. “Our research shows this is not the case.”

The University of Sussex study, which included two experiments, showed that when drivers were engaged in a conversation and were using visual imagery behind the wheel, their brains failed to recognize all the hazards on the road in front of them.

House Bill 4466 has been referred to the House Committee on Transportation and Infrastructure. A hearing has not yet been scheduled.

If you’ve been injured in a distracted driving accident and have questions about your entitlement to Michigan no-fault benefits or other compensation, contact our Lansing car accident lawyers or Grand Rapids auto accident attorneys today for a free consultation.