Posted by Steve and Tom Sinas
in Auto Insurance, Auto No-Fault, Fox 17, In the Media 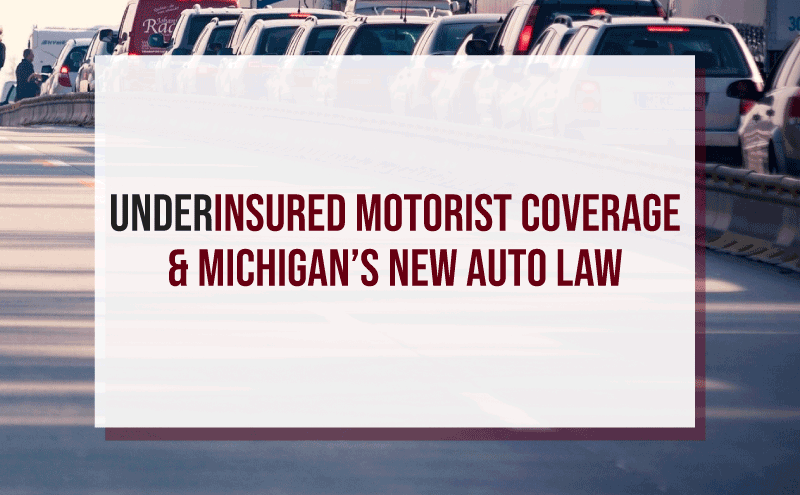 We recently shared our auto insurance recommendations due to the consumer options available as of July 1, 2020. In that article, we recommended purchasing significant amounts of underinsured motorist coverage (UIM). This week on Fox 17 “Know the Law,” Grand Rapids car crash lawyer, Tom Sinas, further explained the importance of underinsured motorist coverage and Michigan’s new auto law, including a significant shift in the system leading to our recommendation of purchasing significant amounts of UIM.

Should I Purchase Underinsured Motorist Coverage?

First, it’s important to know that underinsured motorist coverage is not mandatory but an optional add-on to your auto insurance policy. Underinsured motorist coverage (also called UIM) is a policy you purchase from your own auto insurer. This coverage essentially steps into your insurer’s shoes to compensate you for damages caused by a driver with an insufficient auto insurance policy limit. While it is not a required coverage, we have always strongly recommended consumers consider purchasing it. Due to the recent changes in Michigan’s auto no-fault system, we believe this optional coverage is more important to purchase than ever before.

How Much Underinsured Motorist Coverage Should I Purchase?

Now that consumers have different insurance coverage options and due to the fact that every driver is now open to more liability, resulting in many purchasing higher amounts of liability insurance, we recommend purchasing a higher amount of underinsured coverage. If the other driver involved in the motor vehicle collision caused the accident and you recover compensation from them, your own auto insurance company can subtract the amount of your recovery from your underinsured motorist claim. In this “Know the Law” segment, Tom uses the following example to help explain:

This has always been the case, pre and post-reform. However, the change we are seeing as of summer 2020 is more motorists are purchasing higher liability insurance limits. The new auto law sets the default amount at $250,000 with a minimum of $50,000. So in instances where you have purchased a $250,000 UIM policy and the person who caused the accident has $250,000 in liability insurance, you would be left with zero after your insurance company collects from your recovery from the other driver.

Therefore, we recommend purchasing as much underinsured motorist coverage as you can afford. We also find that this coverage is generally relatively affordable.