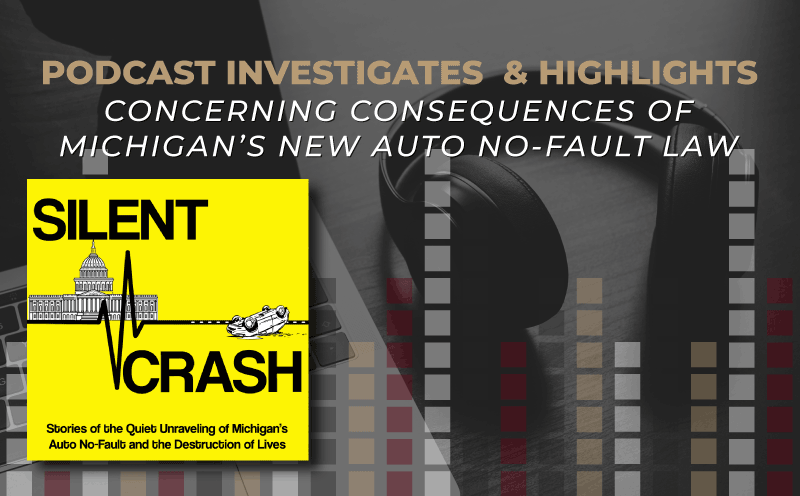 Have you heard of 1C Story Network’s new podcast “Silent Crash: The Quiet Unraveling of Michigan’s Auto No-Fault and the Destruction of Lives?” If you haven’t yet, visit your favorite podcast platform, and check it out. We think every single Michigander should give this podcast a listen to better understand our state’s auto insurance system and the concerning new frontier we find ourselves in following the 2019 no-fault reforms.

You can access the podcast via the buttons below:

Below, you will find a brief overview of what each episode in the series so far is about. We also include relevant links to additional information for those needing to dive further into sub-topics. We hope listeners of the podcast feel free to use this as a resource for educational purposes and find it helpful.

Podcast host Rebeca Seitz describes a call she received and a plea for help regarding what was happening in Michigan. The caller went on to describe the horrific situation currently unfolding in our state regarding our gutted no-fault system and one of Michigan’s most vulnerable populations – car crash survivors. She detailed situations of no-fault providers having to close their doors, families being forced to drop loved ones off at emergency departments or nursing homes, even tragic stories of people dying because they could no longer access the care they had received since their car crash up until the new no-fault law went into full effect in July 2021.

For those listening along, here are a few related links to further information, reading, and videos on relevant sub-topics.

Episode 2: Tricia, Jake, and a $5B Smokescreen

In the second episode, podcast host Rebeca interviewed Managing Partner, George Sinas. Here’s what he thinks is the most effective way to get relief for people affected by PA 21 and 22.

I’m pleased that through efforts like you and your show, light is shining on the problem. And light is necessary. You’re not going to ever fix this thing without a lot of light being reflected. But you know what? Ultimately, the light is going to turn to heat. If light doesn’t beget the heat, we are going to be talking about this again next year.”

Seitz goes on to talk about her trip to Michigan where she met with people directly impacted by the atrocious Public Acts 21 and 22. The stories are gut-wrenching but real-life snippets of what innumerable Michigan families are experiencing. Please listen to them.

This episode also details Governor Whitmer’s recent announcement that $5 billion from the MCCA fund should be returned to Michigan consumers. This refund will go directly to the Michigan auto insurance companies who will then be able to determine how and when that money gets to the payors, IE Michigan drivers who already paid into that fund.

The following is a list of relevant links to related information:

Episode 3: A Tale of Two Men

Urged to “follow the money,” podcast host Rebeca begins investing the prominent leaders and developments behind the scenes, many of which failed to reach the headlines.

Seitz also speaks with a Michigan motorcycle crash survivor and military veteran who discusses his life-changing crash, long-term post-acute care, and the changes he faces now due to Michigan’s no-fault reforms.

Seitz continues to “follow the money” and uncover behind-the-scenes goings-on. Turns out, despite statewide public outcry about Michigan having the “highest auto insurance premiums in the country” Detroit and a few outlier cities were in fact paying disproportionate insurance rates due to unfair non-driving rate-setting factors. Now, following the reforms, not only do Detroiters no longer have lifetime comprehensive medical coverage, but the state at large is suffering the same fate.

The episode also shares the story of a sister providing care for her tragically injured brother and the many unknowns now in their future, wrapping up with a discussion with the owner of a patient care facility and the roadblocks she faces in keeping her business doors open.

Below are links you may find relevant to the topics discussed in Episode 4:

Episode 5: Will the Senator Please Rise?

“Silent Crash” podcast host asks some uncomfortable questions regarding a prominent Michigan politician’s use of power and involvement in the enactment of PA 21 and 22. While PA 21 and PA 22 were still on the discussion floor, members from both sides of the aisle raised concerns about how, if passed, this legislation could detrimentally impact the lives of the 18,000 injured Michiganders who rely on Michigan’s robust auto no-fault coverage. This prominent politician assured concerned parties that PA 21 and 22 would not retroactively be applied, meaning the new no-fault law would not impact those already navigating the auto no-fault system. Lawmakers acted under this belief.

Lansing auto accident attorney, George Sinas, was once again interviewed for this segment and had the following to say.

The episode ends with an urge and reminder that “it is never too late to do the right thing.”

Look at the historic amicus curiae brief that was filed in Andary by Representative Julie Brixie and Representative Schroeder. In that brief, two legislators said to the Court of Appeals in Andary 'We didn't intend for this thing to have a retroactive application.' And in support of that, the brief attached as Exibit A a statement signed by seventy-three current and former legislators who voted on this thing stating 'We never intended retroactive application. We never intended to change the rules on people who bought policies that didn't have these limitations. We never intended that.' I submit that this is incredible evidence that the retroactive application of this law - for people who bought and were injured before its enactment - is absolutely inappropriate.``

“Silent Crash” took a break during the week of Thanksgiving, however host Rebeca made sure to say a quick thank you for the support received by community members. If you would like to donate to the podcast, check out the podcast’s GoFundMe at the link below:

Episode 7: The Doctor is In

In this episode, podcast host Rebeca interviews Dr. Owen Perlman, who has served catastrophic car accident survivors for years and has taken active roles in providing care for patients with severe conditions following a spinal cord injury or traumatic brain injury. Dr. Perlman explained the complexities in care for catastrophically injured patients and the real impact of his patients losing their access to care and therefore, regressing in their condition.

Listen to this episode to hear from a Michigan doctor working directly with auto accident patients about the many ways that the 2019 reforms have systemically torn apart a car accident survivor’s access to care and quality of life.

Episode 8: The Doctor is Still In…Is a Fix In, Too?

The first part of this episode continues the conversation with Doctor Owen Perlman from Episode 7, where he describes the problematic process of how Public Acts 21 and 22 were passed without the input of stakeholders. Their conversation revisits the involvement of powerful leaders that were discussed in Episode 3 and sheds a light on their possible motivations for pushing these bills into law.

Seitz then discusses legislation that is currently being written in the Michigan House in an attempt to ‘fix’ the 2019 reforms.

Episode 9: The Rubber Hits the Road

Seitz interviews accident survivor Shannon Perkins, who had to have her left leg partially amputated due to her auto accident injuries and needs continued care, as well as another surgery. Perkins shares her experience in navigating Michigan’s auto no-fault system before the 2019 reforms went into effect, and the extreme difficulty she is now facing under the reformed law.

Episode 10: Legacy in the Making

Our very own George Sinas joined podcast host Rebeca during this episode for an in-depth look at Michigan’s auto no-fault system, including the history of Michigan’s no-fault legislation, the legal changes and challenges now faced due to the 2019 reforms, and the lawsuit challenging the constitutionality of various areas of the reforms.

It was working, with certain exceptions, very well. What wasn’t working was that there was not enough restraints and controls imposed on the industry to make sure that no-fault remained affordable…I want to be clear – I don’t question the motives or the intentions of anybody. What I fault is that this train has been ‘rolling down the track’ for decades, and there were tools there that government servants never utilized. And what happened? The premiums kept going up, the political pressures got higher, and the heat got hotter.”

Episode 11: A Story that Can’t Wait

This episode covers the case of one Michigan accident survivor that faces a terrible reality in mid-January due to the impacts of the 2019 no-fault reform. Rebeca stresses the importance of urgent legislative action once again on “Silent Crash.”

Thank you, IC Story Network, for this incredible work and the spotlight you are putting on the mess of Michigan’s auto no-fault insurance system. We hope everyone finds this resource helpful and will be updating this page accordingly as new episodes air to connect listeners with additional legal resources and information they may need.