Sinas Dramis in the News

Since opening our doors more than 60 years ago, our attorneys have devoted their time and effort to fight for the rights of injured people. Our longstanding presence in the community and rock-solid reputation is why our firm is a recognized leader in Michigan personal injury and family law. Because of this, our lawyers are called upon regularly to speak at educational seminars and interviewed in countless media publications and media segments.

Our Lawyers in the Media 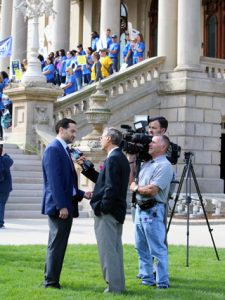 Below are a few of our attorney’s and firm’s recent recognition and accolades. View more of our awards here.

For more on the firm’s commitment leadership role, see our Announcements. Information about our dedication to giving back, see Community Involvement.

For more on the firm and its family history, see About The Sinas Dramis Law Firm.