Posted by Steve and Tom Sinas
in Announcements, Recognition 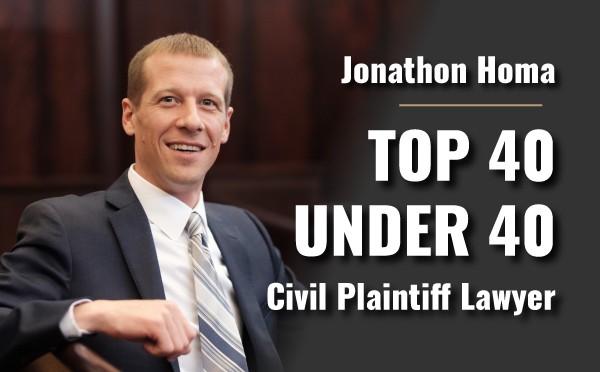 We are pleased to announce that Sinas Dramis Law Firm attorney Jonathon Homa has been selected as a “Top 40 Under 40 Civil Plaintiff Lawyer” in Michigan by The National Trial Lawyers.

To be honored as a “Top 40 Under 40” attorney, awardees must pass a multi-phase selection process that includes peer nominations and third-party research. Jon has been recognized for his proven representation of clients and obtaining exceptional trial results through superior performance, skills, and leadership ability. His name will be included in a comprehensive list of credible attorneys in The National Trial Lawyers’ network.

Jon has continuously exhibited qualities consistent with the Sinas Dramis standard of excellence. He strives to obtain fair compensation for his clients in a variety of personal injury matters including motor vehicle accidents, wrongful death suits, and constitutional torts, among others. Jon’s calm and reassuring demeanor has been critical in handling delicate matters such as sexual assault cases. Paired with his determined pursuit for justice, Jon has effectively represented victims in numerous high-profile cases, including the Nassar/MSU Sexual Assault Scandal, the Flint Water Crisis, and Roundup cases against Monsanto.

It’s no surprise to us that Jon is being recognized as a top attorney, as he has demonstrated his superior performance and leadership in his handling of cases. We are proud to have him on the Sinas Dramis team! Congratulation, Jon, on being named a “Top 40 Under 40” civil plaintiff lawyer!